Handing over the cash 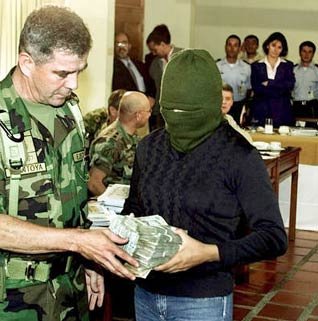 Blair will pay for his betrayal in Brussels, says The Telegraph leader this morning, noting that Britain - which, for almost the entire period of its membership, has been one of only two countries to make any net payment to the EU – could have been spared its annual tribute of £12 billion, and might have used these savings to (for example) give us all a two thirds cut in council tax.

This rather puts into perspective the absurd piece by Anatole Kaletsky in The Times last Wednesday, to which we referred last week. In that piece, he airily dismissed the rebate as a "paltry" sum, less than a half of one percent of British public spending – thus advocating that we should abandon it.

Ruminating on this further, what Kaletsky seems to be forgetting (or ignoring) is the rather more subtle distinction that the "housewife" Thatcher would have instinctively understood. That is the difference between gross and disposable income. Every householder knows that much of the monthly income goes to the regular bills – the mortgage, Council tax, utilities, food, clothing, etc., - so the actual amount of discretionary spending, the amount of cash can actually use for non-recurring items can be very small.

Governments are no different. Its income may be huge by personal standards, but so are its monthly outgoings, not least the ever-expanding public sector wages bill. The actual amount available for discretionary spending – the money that is not already spoken-for - is relatively modest. In that context, the cash Blair has just given away to Brussels is a relatively large proportion of that total.

And, according to the Financial Times this morning, Blair concession on the rebate appears to be far bigger than Downing Street has publicly admitted, leaving the UK up to £2bn worse off each year by the end of this decade.

Although the prime minister agreed to slash the cash the UK receives from the rebate by £7bn over the seven years from 2007 to 2013, analysis of detail of the agreement shows that the UK's rebate will in fact remain untouched in 2007 and 2008. Instead, the £7bn cash loss suffered by the UK is to be compressed into the years between 2009 and 2013.

That, according to the FT, is likely to create two problems for the UK treasury. First, the full impact of the cash shortfall is now likely to be concentrated on the period covered by Gordon Brown's next spending review, spanning 2008-2009 to 2010-2011. Secondly, the new profile for budget rebate receipts means that, after 2013, the annual cash deduction of £2bn for that year will be locked in for all future years. It is unlikely the UK could renegotiate a more advantageous position after that date.

One a more positive note, however, foreign office officials have confirmed that the budget deal has to be ratified by a vote in the UK Parliament. This is news to us, but at least there is a possibility that MPs could throw out the deal. Any betting on whether they are likely to do that? And, if they don't, who do we blame?

Note on the photo - although this appears to be a US officer handing over money to what, one supposes, is a terrorist, it is the only photo I could find of money being handed over in large amounts. Wouldn't it be brilliant if this was how the money was given to Brussels - an annual ceremony, where Gordon gives dollops of cash to Barroso. And, by the by, don't you just love the expression of the lady in the background!