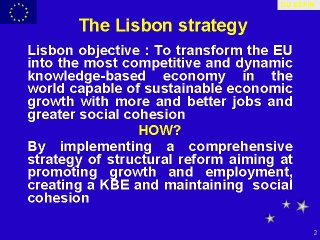 What was that about Europe becoming the most dynamic and competitive knowledge-based economy in the world by 2010?

Despite the hubris, there are still one or two problems on the way, not least the latest set of economic figures for the Eurozone. According to the Financial Times, industrial production fell sharply across the eurozone in October, highlighting the fragility of the continental European economic recovery. The annual growth of total production was down to only 0.1 per cent, after a fall of 0.8 per cent in October.

The one bright spot is Germany, where output was sharply higher, helped by its strong capital goods industries, but the 4.3 percent rise in German annual industrial output was more than outweighed by falls of 3 percent in France and 2.7 percent in Italy. However, German producer price inflation recorded its highest annual rate in 23 years in November, with the price of finished goods leaving factories up 5 percent on the year, pushed higher by high oil prices and demand for German products.

Neither are "European citizens" entirely on-message, according to a recent study – reported by Euractiv.

In the ten countries covered by the study, 57 percent of French and two thirds of Spanish workers aged 50 to 59 say they want to retire as soon as possible. Even in the Netherlands, where workers are most eager to work during their old age, 31 percent said they would rather retire earlier.

Not for the first time, the leaders are out of touch with the led, but in this case, the people are defying reality. And with their leaders in cloud-cuckoo land over economic reform, something tells me that, things are not going to be getting better in a hurry.