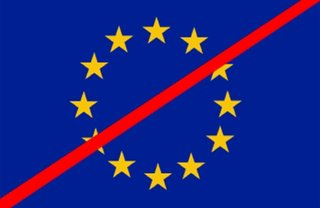 Following the tumultuous events of May and June, when the French and Dutch voted "no" to the EU constitution, support for the European Union, throughout the 25 member states, has declined by a small but significant amount, compared with last spring. That is according to the latest Eurobarometer survey, released yesterday.

Support for EU membership now stands at 50 percent (-3), the score for the perceived benefits of membership is 52 percent (-3) and the EU’s image is positive according to 44 percent of respondents (-3).

The UK scores, as always, are lower than the average for the EU25, standing respectively at 34 percent (-2), 37 percent (-3) and 29 percent (+1). In terms of the approval rating, only Austria scored lower, at 32 percent (-5). Luxembourg and Ireland expressed the most approval (82 percent and 73 percent, respectively).

Interestingly, UK confidence in the EU institutions dropped even further than the general ratings, the parliament standing at 27 percent (-7), the commission at 26 percent (-5) and the council at 18 percent (-9).

The Fragrant Margot has a ready explanation for this decline: "Citizens have seen too much of selfish interest by member states, too little vision and solidarity," she says. No doubt, she takes comfort from the finding that 60 percent of "Europeans" believe that a constitution is necessary to ensure that European institutions work well and 64 percent believe it will make the EU "more democratic".

Only 13 percent believe that the constitution should be dropped altogether, against 22 percent who believe ratification should continue, the larger proportion who offered and opinion (49 percent) believing that the document should be renegotiated. Even in France and Holland, there is slender support for dropping the constitution altogether, their scores standing at 15 and 16 percent respectively.

In the UK, therefore, we may be winning the argument but, on an EU-wide level, one can quite see why the "colleagues" think they are in with a chance in having another go at getting the constitution ratified.