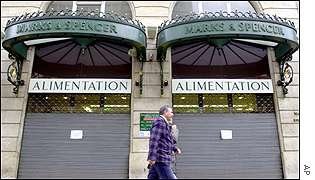 The Sunday Telegraph has come up with an interesting observation – that a reduction of Britain's EU rebate would push the public finances even deeper into the red because Gordon Brown's Pre-Budget Report last week made no allowances for it.

This, apparently, has been confirmed by the Treasury and, says the Telegraph, raises the embarrassing possibility that if Brown raises taxes again, it could be a reduction in the rebate that pushes him into it.

The story, however, would have been that much more interesting if the paper had linked with the Scotsman which is reporting that our Gordon is also facing the prospect of seeing billions of pounds drained from the Treasury's coffers this week due to a landmark ruling from the European Court of Justice on a Marks & Spencer tax complaint.

This arises out of the Treasury refusing to accept tax losses which M&S incurred from its abortive venture into the French market, the details of which we reported in December 2004, in January of this year and again in April, pointing out that the UK Treasury could lose over £5 billion if the ECJ found in favour of M&S.

Now, after five years of legal wrangling, the ECJ is due to pronounce its final ruling on the case on Tuesday and although M&S only stand to gain a maximum of £30m, hundreds of other British companies would be able to use the verdict to make similar claims against the Treasury. It would also prompt a flood of similar claims against governments across Europe.

While the rebate might prove embarrassing to Gordon, therefore, he will be doubly embarrassed if the ECJ does find for M&S – as it is expected to do - leaving the British taxpayer a whole new tranche of money to find, all arising out of our membership of the European Union. We are now talking about very serious money, big enough for even the somnambulant media and the British public to notice. It cannot but help the cause.