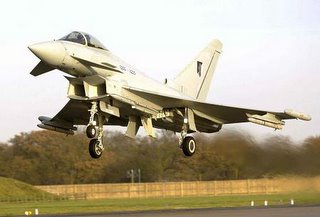 One of the things us defence wonks have been wondering about is how Gordon Brown is managing to pay for all the goodies he is buying the Armed Forces, especially when his MoD colleagues are wasting so much money on sub-standard European kit.

Not least of his woes is that the much-delayed Eurofighter is now rolling off the production lines and, for every gleaming machine that arrives on the doorstep, he must sign a cheque for a cool £65 million. But with Saudi Arabia prepared to buy 48 of the aircraft, with an option to purchase another 24, potentially worth £10 billion, Gordon will hardly be able to believe his luck.

While the purchase is obviously good news for BAE Systems, even though its partners EADS and Finmeccanica take two-thirds of the dosh but, according to Janes Weekly, it is even better for the chancellor,

The delivery of first 24 aircraft is to be drawn from the Royal Air Force's production run of 89 Tranche 2 Eurofighters, a £4.3 billion ($7.5 billion) contract for which was signed in December 2004. This means that our Gordon can manage his cash-flow that little bit better by delaying the evil day when he has to pay the bill for the RAF's new toys.

Of course, the MoD stresses that the RAF will receive additional Tranche 2 airframes to offset this transfer, and that the Saudi Arabian deal will have no impact on its commitment to sign a Tranche 3 deal to take the UK’s total Typhoon purchase to 232 aircraft. Leave it a bit, though, and that order will evaporate, many – as the Financial Times observes - expecting plans for the remaining aircraft to remain mothballed.

With a bit more luck, he might even be able to afford the extra £7 billion that Blair has given the EU to go towards its £7.6 billion annual administrative expenses.