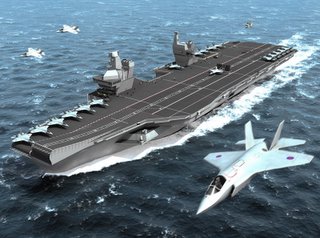 Speaking of old news, today’s Telegraph also carries a report on the proposed super-carriers, headlining that: “New carriers are facing costly delays”. That, for our blog readers, is hardly news at all – we did the story at the end of October.

However, this is the Defence Committee Report, entitled “Future Carrier and Joint Combat Aircraft Programmes”, which is now available on line, running to 101 pages, including transcripts of oral evidence.

Still it is a change to see the Telegraph publish a halfway serious defence story and the account is fairly accurate, stating that the project to provide Britain with two "super carriers", seen as key to future military strategy, has been criticised for falling "seriously behind schedule" and is in danger of becoming unaffordable.

Analysts are concerned that there will be a "capability gap". They fear that the two 72,000-ton carriers could be built with no aircraft to protect them. This could lead to the Royal Navy using outdated Harrier fighters at "substantial extra cost".

But the “bombshell”, for what it’s worth is that the MPs say Britain may have to consider scrapping its order for the Joint Strike Fighter if agreement cannot be reached allowing the Navy to operate and service the jets independently. This is the technology transfer problem, to which we have referred on many occasions.

But something which should give supporters of European projects pause for thought is the financial details of the JSF project. For an investment of $2 billion as a level one partner, British contractors have been awarded about $6.75 billion-worth of work – and there is much more to come when the manufacturing phase starts.

This does lend support to the thesis that it is much better to have a small part in larger US projects than even a major share in a European project, that has little sales potential outside the industrial partners. Thus, if we cancel because of the US reluctance to pass technology to us – because of our close European ties and their links with China – the loss will be a great deal more than simply the lack of an aircraft for our new carriers (if they are ever built).