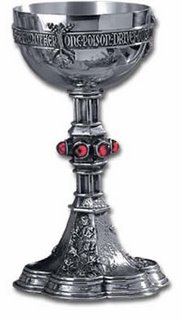 In a fine display of Cloverism, the Daily Telegraph this morning runs its lead story on how "Blair giveaway will cost taxpayer double".

Readers who find the story a little bit familiar will find that we did it on this blog, two days ago, having lifted it from the Financial Times. Unlike the Telegraph, though, at least on this occasion we acknowledged the source.

The essence of the story remains the same. Because of the peculiarities of the way the multi-annual budget pans out, the UK rebate is largely unchanged for the first three years of the financial period 2007-13, Blair's giveaway kicking-in only in 2010, when instead of £1 billion it will be nearly two, for that and successive years. Worse still, that figure is likely to be "locked in" as a minimum annual deduction when a new budget is negotiated for the period after 2013.

That is, of course, unless El Presidente Barroso gets his way, and the EU manages to introduce a direct tax – which is what the banner headline in the Express is suggesting, with the strap, "How Brussels plans to raid wages".

But wait a minute, did you not read this on the blog, also two days ago? I sometimes think we ought to give up blogging and take up journalism – it would be so much more relaxing – except that I think we lifted that from the FT as well, although we didn't acknowledge it that time.

One interesting suggestion in the Express piece though, is that Barroso is likely to go for a fuel tax, "because it can be promoted as a 'green' anti-pollution measure". They may be right, but my betting is on road charging, using the Galileo satellite positioning system, where Brussels can cream off a levy through national collection authorities.

Still, if you want something original, go to the Telegraph letters page where, amongst others, Michael Bouet of Crawley, W Sussex, complains that "EU contributions mean loss of public services".

But then, I've just had a thought. If the rebate claw-back does not kick-in until 2010, that will be after the next general election, when there is a possibility (however remote) that the Conservatives are back in power. Rather than Gordon Brown having to find the money, that unenviable task might fall to Mr Cameroon and his chums. Could this be why our Dave was so muted in his attack on Tone yesterday?

That would be the ultimate irony. Some political commentators have been thinking in terms of Blair leaving a poison chalice for Gordon when he takes over the presidency (oops, premiership) but, in fact, it could be that Cameroon is the inheritor. What fun… if you can call it that.