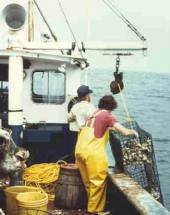 I always feel just a smidgin of guilt nicking other people's copy for this blog, although we try to be fairly responsible about acknowledging our sources. But not so, it seems, the great Charles Clover of The Daily Telegraph who, today, writes an "exclusive story" about how the "US provides lesson in building fish stocks".

Datelined, "Gloucester, Massachusetts", Clover writes in the context of "European fisheries ministers" convening to set quotas this week, reporting that fishermen in New England are celebrating an increase of a third in their fish stocks over the past decade, achieved using conservation methods the EU has rejected.

According to the great Clover, the size of cod and haddock on the auction market in Gloucester, the capital of New England's fishing industry, is more than twice what you will see in Peterhead, north-east Scotland, or other North Sea ports. This, he tells us, is because the New England Fishery Management Council has set the minimum mesh size of the nets fishermen may use at 6.5in, which ensures that the cod and haddock have bred at least twice before they are caught.

And so the story continues, giving the glad tidings that, under a more scientifically-based and intelligent fisheries management system, it is quite possible to restore health to previously depleted commercial fisheries – in contrast with the Common Fisheries Policy, which goes from bad to worse.

But before congratulating the great Clover on his "scoop", it is as well to ask where he got most of his information. In fact, the idea for the story and the contacts came from former shadow fisheries minister Owen Paterson, who also sent Clover a detailed report of his own experiences when he visited New England in October last year.

And so detailed and comprehensive was the report that Clover – having failed to pick up anything like as much detail on his visit – lifted great slugs of the report and quoted them verbatim, without any acknowledgement of the source.

We are well used to complaining about the lack of activity by opposition spokesmen, wondering at times where all the money goes that we pay towards their expenses. Yet here we have a case of a politician doing the business and getting shafted by the media as a reward. To the great Clover, though, this is just "another day, another story". What it is to be so important.

Email ThisBlogThis!Share to TwitterShare to FacebookShare to Pinterest
Labels: fish