Give them the tools 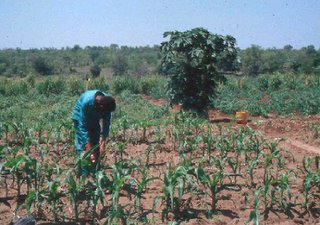 Amid all the pointless bleating about aid to Africa, accompanied as it is usually with all sorts of pseudo-scientific dampeners on anything that might be helpful as well as hysterical demonstrations by the anti-globalizers, it is always interesting to hear from African analysts.

One such is the Ghanaian Franklin Cudjoe, Director of the think-tank Imani, in Accra. Yesterday all the editions of the Wall Street Journal carried his article: "Africa needs freer markets – and fewer tyrants". As readers have to subscribe to the WSJE on the net, Mr Cudjoe and his staff have made the piece available on their website.

His argument is very straightforward and one that he and numerous of his colleagues have used before: aid that feeds corrupt and oppressive regimes in Africa is not only not helpful, it is counter-productive. As he rightly says, most of Africa is extremely fertile. It ought not experience famine. Why is that situation so prevalent?

Niger is little-blessed by nature, but it has also spent its postcolonial era trying various forms of failed government, with Marxism reigning longest. A quarter of the population - 2.5 million people - faces starvation.

Yet more temperate southern and eastern African countries are on the edge of famine, too, with 10 million affected in southern Africa alone. Again, we find the same economic profile: Zimbabwe, Malawi, Zambia, Mozambique, Swaziland and Lesotho all lack economic freedom and property rights; all have economies mismanaged by the state; all depend on aid.

All these countries have a history of utopian schemes that failed to produce everlasting manna. State farms, marketing boards, land redistribution, price controls and huge regional tariffs left few incentives or opportunities for subsistence farmers to expand. Despite torrents of aid, these cruel social experiments could not turn sands verdant or prevent the granaries of southern and eastern Africa from rotting.

In particular he mentions Ethiopian Prime Minister Meles Zenawi, a member of the Tony Blair's "Commission for Africa" and a man who has clearly learnt to mouth the sort of platitudes that go down well with the trendy protectionists of the rich west (naming no names but Zac Goldsmith springs to mind, among others).

Mr Cudjoe, not being a scion of an ultra-rich western family, has a different view of Mr Zenawi:

Ethiopia's Prime Minister Meles Zenawi believes that allowing Ethiopians to own their land would make them sell out to multinationals. He seems to have overlooked a basic market principle: It demands a willing seller and a willing buyer at an agreed price. If that price is worth selling for, the farmer might have some money to reinvest elsewhere; if that price is worth buying for, the purchaser must have plans to make the land profitable. If there is no sale, owners might have an incentive to invest in their own land and future, having, at last, the collateral of the land on which to get a loan.

After decades of socialism, Ethiopia's agricultural sector - the mainstay of the economy - is less productive per capita than 20 years ago when Band Aid tried to defeat famine. Although 60 percent of the country is arable, only ten percent has been cultivated. Ethiopia is entirely dependent on donations; but instead of grasping reality, Mr. Zenawi, a member of Tony Blair's "Commission for Africa," is forcing resettlement on 2.2 million people.

Do Mr Blair and Mr Brown know this interesting fact about their colleague, Mr Zenawi?

Nor does Mr Cudjoe spare some of the well-meaning westerners.

Meanwhile, Prof. Jeffrey Sachs, the UN's Chief Advisor on the Millennium Development Goals, believes Africa needs more cash for an African "Green Revolution" - a pale imitation of the very different Asian agricultural revolution of the 1960s and '70s. The equivalent of "some €40 per villager" (roughly $50) in aid, Prof. Sachs says, holds the key.

His Green Revolution would spend that money to improve agricultural infrastructure, soil nutrients, water quality and seeds ability to survive harsh climates and insects, and better agricultural infrastructure. These, however, are precisely the benefits that come from property rights, which also inspire the motivation to invest in, improve and preserve the land - motivation that does not come from aid, central control and state serfdom.

Prof. Sachs is right about tougher seeds but not about more aid. By his own calculation, "out of every dollar of aid given to Africa, an estimated 16 percent went to consultants from donor countries, 26 percent went into emergency aid and relief operations, and 14 percent went into debt servicing." He could not account for how much of the remaining 44 percent got siphoned off by corrupt officials, nor could he explain why $400 billion dollars of aid over the last 30 years has left the average African poorer.

And what of the European Union and its obsession with GM? Mr Cudjoe thinks it helps to keep Africa in extreme poverty:

The one thing that could give us drought-resistant and highly productive seeds is biotechnology. Experience shows that genetically modified (GM) crops could increase yields by 25 percent and cost less than Green Revolution techniques. But GM produce faces bans from rich countries, especially the EU, using unscientific "biosafety" protocols under the guise of environmental protection.

This kind of hysteria made Zambia, Angola and Zimbabwe reject famine aid because US or South African maize could not be certified GM-free. Africans therefore have to hope that the US, Canada and Argentina win their case against the EU barriers to GM crops: The World Trade Organization is due to rule early in 2006.

No different really from the obsession with DDT that has killed millions of Africans as nothing else seems to get rid of the malaria mosquito.

Perhaps someone should produce a more truthful film than "The Constant Gardener", showing us who the real villains of the story are: the western lobby groups and NGOs who make it impossible to use science to eradicate the deep-seated problems of Africa; the corrupt politicians and officials who steal the money donated in aid; the socialist governments who impose failed "utopian" solutions that result in famine in fertile lands; and, last but not least, the governments that take the drugs given to them by those supposedly evil pharmaceutical companies free or at cost price and slap so many regulations and taxes on them that they never reach the suffering population.