And who's telling porkies? 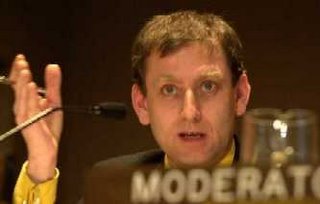 I wonder if the subs thought through their headline on the front page of The Daily Telegraph today. As a comment on the status of the United States after it had walked out of the green-fest on global warming at Monteal, "US out in the cold at world climate talks", should perhaps have read "out in the warm".

But what really is great fun about the robust, no-nonsense attitude of the US – which, despite not signing up to Kyoto, has actually cut its emissions - is that the Beeb's Environment Correspondent, Tim Hirsch (pictured above), has been badly caught out telling porkies.

For this discovery we have to thank the Shadow Chasing blog, via the indefatigable USS Neverdock, in which Hirsch is seen at variance with the official record when writing up his story of the event.

The egregious beebie has it in his story that Canadian prime minister Paul Martin made a pointed appeal to the US, urging the US to "listen to its conscience" and take further steps to reduce emissions linked to global warming.

According to the official record, however, Martin simply noted, in general terms, that, "We must heed the voice of our global conscience", without in any way addressing his remarks to the United States.

Mind you, even Charles Clover of the Telegraph seems to have caught the error bug, writing that Martin told "the reluctant countries including the United States" (his parenthesis) to listen to the "global conscience". No such phrase referring to "reluctant countries" appears in the prime minister's script.

However, Clover makes up for it, regaling us with an account of how the Americans refused to accept a covert attempt to open negotiations on a new treaty. Harlan Watson, the US chief negotiator, is reported as saying: "If it walks like a duck, quacks like a duck, then it is a duck," before stalking out.

Another joy, which Clover conveys, is that American stand-off appeared to have dashed Tony Blair's hopes of including the US in a global consensus to tackle climate change. Yet another failure for our Tone to add to his EU budget debacle.