All eyes on Iraq 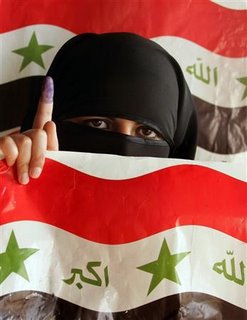 For some reason most of the MSM in America, in Britain and in many other parts of the world (particularly Europe) has decided that what they want to see in Iraq is failure: American failure, western failure, failure of democracy. So they emphasise every set-back, every problem, every bout of fighting and every terrorist attack. They have a problem with the last of these, since these attacks are patently directed against the Iraqi people, regardless of who they are, but somehow, subliminally, they must be anti-American.

Over the Iraqi war the blogosphere has truly come into its own. There are American blogs and Iraqi blogs and blogs run by servicemen in Iraq and by journalists, such as the excellent Michael Yon, embedded with troops. And the story they tell is different.

Yes, they say, things are difficult and may go on being difficult. But there are many developments that are positive. The Iraqis are taking matters into their own hands. They are joining the army and the security forces. They are handing terrorists and would be terrorists over because they see them as their enemy. Above all, they are anxiously becoming involved in local and national political life.

While final results in the parliamentary elections will not be known for a couple of weeks (something that has caused desperate sneers among the left-wing journalists and commentators and, even, some bloggers), the biggest achievement of all is the turn-out.

It is estimated that 11 million of the 15 million registered voters turned out. That puts it at 70 per cent. We used to have turn-outs like that. The election went peacefully and the threatened dislocation by the enemies of free Iraq, at present based in neighbouring Iran, was thwarted. Some killings have been reported but the predicted massacres did not happen.

In the Shi’ite province of Najaf the turn-out was around 80 per cent. The Kurds voted in large numbers but then they always have done. The biggest achievement was in the Sunni provinces, where so many voted that in some places they ran out of ballot papers. This is the most hopeful sign of all, as by and large the “insurrection” was based in the Sunni areas.

Some American bloggers like the admirable Michelle Malkin have been publishing round-ups or referring readers to round-ups of other blogs, many of them of the “moonbat” variety of people grinding their teeth and trying to put the worst possible interpretation on events.

Canny politicians know better. After all, Hillary Clinton, has put a great deal of clear blue water between herself and the “bring the troops home NOW” brigade in the Democratic Party. She knows what does and what does not play well with the electorate.

Senator Joseph Biden, having made all sorts of misleading comments in the past and having assured everyone that the coalition forces “were doomed in Iraq” decided to take part in the doom scenario by grabbing himself a little publicity. He was photographed among jubilant Iraqis, sporting a purple finger.

Well, of course, one has to be careful as a politician and look to the future rather than the past. So, maybe we shall hear a little less about Iraq being another Vietnam. Anything less like Vietnam it is hard to imagine.

Meanwhile, let us wish the courageous Iraqi people well. They deserve it.