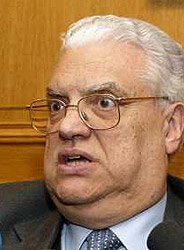 Just before Christmas, the Portuguese prime minister, Jose Socrates, said that he would take up the challenge of reviving the EU constitution during his country’s EU presidency in the second half of 2007. This followed an announcement from Merkel that she would pursue that objective during its turn at the presidency in the first half of that year.

"The project of the constitutional treaty was signed by the 25 member states and it would not be right [to forget it]", said Socrates told his own parliament.

Then, yesterday, on the eve of the their EU presidency, Austrian officials said they were sympathetic to an initiative by Germany's chancellor, Angela Merkel, to revive the constitution. "We don't want it to die. But we have to be realistic," one official said. "It's going to take one or two presidencies to reach a solution."

In Amaral's view, it "says nothing to the European citizen" and "is the total opposite of what is required." It would be prudent and honest of EU leaders to learn the lessons of these French and Dutch referendums, he added.

"Prudence" and "honesty" though, are not the most obvious characteristics of "EU leaders", so it will be interesting to whether Amaral will be whipped into line or whether this is a case of thieves are falling out.