(Euro) Santa is going to be late 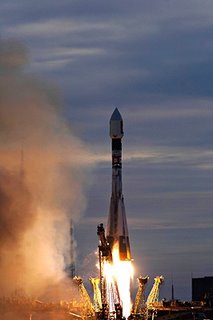 After it had been despatched to Russia on 6 December (see here), today The Business is reporting that the first of the EU's Galileo satellites, code-named GIOVE A, is to be launched on 26 December (Boxing Day), from the Baikonur space center in Kazakhstan.

Actually, it isn't. That was the original intention but a few days ago the Deutsche Presse-Agentur reported that a "glitch" had been found after a final check at the Baikonur space centre. Engineers were working to repair a helium valve on the 1500lb satellite, which was to be propelled into orbit 15,000 miles above the Earth by a Russian Soyuz carrier rocket.

Then, yesterday, we got a terse report from Novosti, stating that the Russian Space Agency had postponed the launch to 28 December. The Agency said the launch had been postponed at the request of the project operator, Russian-European joint venture Starsem, offering no further explanation.

So confident was the European Space Agency, however, that it already has the propaganda story televised and in the bag, complete with an hubristic statement from EU transport commissioner, Jacques "Wheel" Barrot. He tells us that: "This (sic) European Union (are there any others?) will provide all our citizens with new services, very valuable services, a much more precise guidance system for cars, lorries, and dangerous transport travelling across the routes of Europe."

No doubt, the broadcast was intended for transmission on Christmas Day, by the likes of the Beeb – only too pleased to extol the virtues of the EU. Hilariously, accompanied by pictures of "a launch animation", it begins with the words, "This year, every European is going to get a very special Christmas present. The launch of Giove, scheduled for 26 December, will mark the inauguration of Galileo, Europe's own satellite navigation system."

Pity about that, really - but it looks like the (Euro) Santa is going to be a little late.