"Run away, run away" 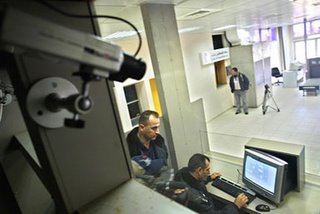 “There have been a spate of kidnappings, gun battles and armed takeovers of government institutions in the Gaza Strip in recent months, putting more pressure on Palestinian President Mahmoud Abbas to instill order ahead of the January parliamentary elections, in which his Fatah party faces strong challenge from HAMAS.”

One cannot argue with that summary but they seem to have simplified the story somewhat. (Don’t tell me Al-Jazeera is dumbing down!) 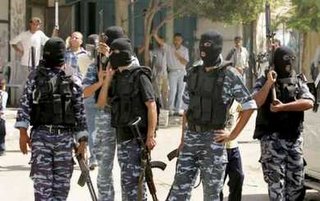 At present we have the following players in Gaza: Fatah, which has been splitting and splintering but has come together for long enough to put up a single list for the elections; HAMAS, which did extremely well in the municipal elections but has not precisely given up its intentions to keep attacking Israel; various Gaza families, who seem bent on fighting each other to the death if necessary; the Palestinian security forces who are answerable (after a fashion) to the Palestinian Ministry of Interior; the Palestinian police force, which seems seriously dissatisfied with the Palestinian security forces; an unknown group that kidnapped the British “peace activist” (according to Al-Jazeera) Kate Burton and her parents; the Palestinian Police Chief Alaa Housni, who keeps making statements; the EU monitors at the Rafah crossing; the Israeli government and Israeli Defence Forces; and last but hardly least, the Egyptian government and forces, who have been notably quiet as all hell breaks lose in Gaza.

At any given time some or most of these are participating in the growing anarchy in the region.

Israel has had to declare a “no-go” area in the north of Gaza after persistent firing of rockets in the direction of Ashkelon and has retaliated, though not much. At present they do not seem to want to move back into Gaza and Mahmoud Abbas has made a statement asserting that they have no right to do so, no matter what the provocation is, even if it is the firing of rockets, which, he added belatedly, he also deplores.

This seems to be President Abbas’s role: to deplore matters. He also deplores the persistent kidnappings of foreigners in the area. Most of these appear to be peaceful. The kidnappers use their action to emphasise some point in a dispute between families or demand employment in the government sector. The victims are routinely released.

Not so with Kate Burton and her parents. Ms Burton, confident that her record as a human rights activist or peace activist (take your pick) would protect her and her visitors despite FCO warnings that Gaza was a dangerous place to be in, blithely took her parents to Rafah crossing, where they were kidnapped by an unknown group.

Curiously, even after 36 hours the group has made no demands and there seems no information of the Burton family’s whereabouts, despite the house-to-house searches conducted by the Palestinian Security Forces in the Gaza town of Khan Younis.

This has not prevented Police Chief Housni from making the following statement:

“Those who have them have not yet made any demands and have not yet announced who they are. These are enemies to the Palestinian people. We will get them. If we have to use force we will.”

Oh fine. But surely, before he uses force it might be a good idea to find out who the people are. Or maybe not.

All sorts of other people have been calling for the release of the Burton family, including the Al-Aqsa Martyrs’ Brigade and, inevitably, HAMAS.

Meanwhile, the Muslim Association of Britain (a completely new player) has announced that if the hostages (well, since we do not know why they were kidnapped, this may not be the right word) are not released by Saturday morning, an envoy would be despatched to negotiate. Unfortunately, negotiation does have this in common with the use of force: you do need to know who the other guy is.

As it happens, the sending of an envoy may or may not be a good idea. As Reuter’s says:

“The Muslim Association of Britain had previously sent an envoy to Iraq to seek the release of British hostage Norman Kember, who was abducted in Baghdad in November and whose whereabouts remain unknown.”

Today the kaleidoscope shifted again. The Palestinian police, dissatisfied with the Palestinian security forces and the general lawlessness of the region, which resulted in the death of at least one of their officers, stormed the Rafah crossing, which is supposed to be monitored by EU officials.

The latter are not, of course, equipped to deal with groups of Palestinians fighting each other and, therefore, they prudently fled from the whole mess, taking refuge with the Israeli Defence Forces in Kerem Shalom. The crossing had to be closed as, according to the carefully worked out agreement, it cannot function without EU monitors.

Police Chief Alaa Housni (yes, him again) has announced that the situation has been resolved, though he did not specify what the resolution was. It seems that the EU monitors have returned and the crossing has been opened.

All of which leaves a few problems. Will Mahmoud Abbas be able to create some kind of order in the various unruly parts of his fiefdom, without which the idea of a Palestinian state remains a chimera? And last but very much not least, what will the Egyptians do?

Gaza, let us recall, was not an independent state before the Israeli invasion, but a part of Egypt, a country that has had its own problems with terrorists. Indeed, the Muslim Brotherhood, rather successful in the last elections, is the progenitor of all the other extremist Islamic organizations.

Egypt is also described by numerous commentators as the country that is steadily arming itself with some of the most up-to-date equipment available. One wonders how much of the annual American aid of $2 billion, not to mention aid from other sources goes on that.

The assumption is that Egypt is readying itself for a war with Israel but there are other possibilities. An unruly Gaza and a nominal Palestinian state on its borders may not be quite what the Egyptian government has in mind for the future. Just a thought.