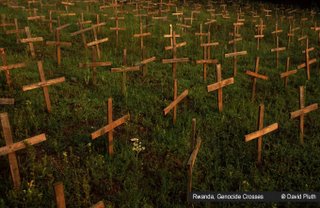 We are all used to seeing France in the lead whenever there is a chance to attack American troops, politicians, anything and everything, however dubious the source of information. We are equally used to pompous French politicians lecturing the rest of us on the greatness of their own culture and the wondrousness of their message to the world.

We are, of course, wearily accustomed to French leaders grabbing the biggest slice of whatever cake is being divided at a European Council while hectoring the current British Prime Minister in outraged terms about Britain’s greed not helping those poor East European countries.

So, among all the synthetic outrage about the as yet unproven CIA prisons and the transportation (with the full knowledge of European governments and intelligence services) of suspected terrorists, let us have a little look at one particular episode in recent French history.

This time we are not talking about the outrageous behaviour of the French troops in Côte d’Ivoire. Instead, let us cast our minds back a decade or more and to the other side of the African continent: Rwanda. For a very long time that name will conjure up appalling horrors in most people’s minds. Well, correction. Most people seem to have forgotten about the horrors of the Rwandan massacre and the pathetic behaviour of the UN, whose Chief of Operations, one Kofi Annan (father of Kojo) refused to send in troops when these were desperately requested by the officers on the ground.

Where do the French come in? Ah well. It is worth recalling that the Hutus, who did the massacring (not just Tutsis but some of their own people, as well) are Francophone, while the Tutsis are Anglophone.

Anxious to retain influence in Africa, during Mitterand’s presidency, as the Times tells us in yesterday’s edition

“France armed and trained President Habyarimana’s forces, which critics say formed the backbone of the Hutu militia during the genocide.”

This has been known for some time and has caused a small controversy in France – a few quiet voices saying that, perhaps, that was not such a good idea, all drowned out by TV pundits who start their pontificating with noble words about France’s mission to civilize the world.

Unfortunately, the whole controversy is about to be revived and in a very unpleasant form. A lawsuit has been filed by six survivors of the massacre against the French army, accusing it of actually conspiring in the Rwandan genocide. President Mitterand sent in 2,500 troops in what was named Opération Turquoise, but there have been accusations all this time that the troops did nothing to prevent the massacre and, indeed, aided the Hutus. The new accusations are more specific.

The Ministry of Defence has made stupendous efforts to stop the case from going ahead and the Minister, Michèle Alliot-Marie, has described the claims as “outlandish”. However, the prosecutor at the army tribunal Jacques Baillet has deemed two of them to be sufficiently crdible to warrant an investigation.

The accounts of the two survivors tell of French soldiers throwing Tutsis out of safe camps they were guarding to certain death, of them standing by while the Hutus carried out their atrocities and, in one case, suggesting that they joined in the killing spree.

This is not the first investigation. There was an attempt to establish the role played by the French troops in 1998 by a parliamentary committee but it was refused most of the documents it wanted on grounds of national security. We shall see whether M Baillet will fare any better