We have a credibility problem 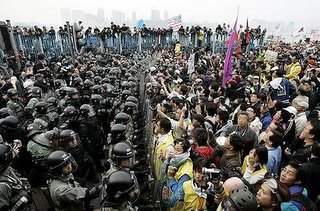 In what has become something of a tradition, mass protests are underscoring WTO talks – this time South Korean farmers, who for the second day have clashed with Hong Kong police.

Meanwhile, the war of words continues inside the convention centre, where the talks are being held, supposedly the final attempt to warp up the so-called Doha round, which is now not expected to be concluded until the end of 2006.

So far, it seems to be the United States which is making the running, accusing the EU of deadlocking the talks with its position on farm subsidies. US trade representative, Rob Portman, has told reporters that if the EU did not allow the developing world greater access to its markets, "I don't see anyone else moving". 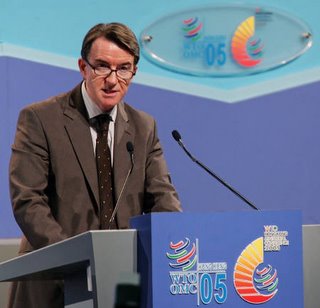 On the other hand, EU trade commissioner, Peter Mandelson, is maintaining his position that Europe had made an "ambitious offer" on cutting agricultural import tariffs and farm subsidies and now wants the 149 WTO members to address manufacturing and services to bring the talks to a successful conclusion.

"We will not succeed, in Hong Kong or after, if we continue to focus on only one part of the round," he complains. "We cannot afford to wait again. When the finishing line is in sight, it is the time to quicken our pace."

Something of Mandelson’s frustrations come through in a personal account written by Malcolm Moore, the Daily Telegraph's Economics Correspondent, who is blogging each day from Hong Kong.

But, with a breakthrough unlikely during the six-day talks, it seems the main item on the agenda is an agreement to set a date for a further round of talks early next year "to nail down a clear outline for a final treaty." Portman is particularly keen on this, saying, "…let us set another deadline to keep the pressure on."

Perhaps, though, the bun-fight is best summed up by Deepak Patel, Zambia's trade minister, who says, "We are full of good intentions, but incapable of implementation," prompting WTO director-general, Pascal Lamy, to declare that the WTO had a credibility problem.

What more can one say?