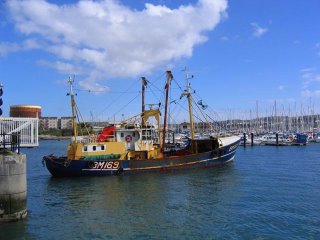 Since the start of the Tory leadership campaign, and especially after the field was narrowed down to two candidates, we have been looking for some “clear blue water” between them, on EU policy.

For reasons we need not rehearse here, but have explored previously on this Blog, we say little in the way of practical difference between David Cameron and David Davis – neither, in our view, offering realistic policies that had any chance of success.

However, this evening, all that changed. Following meetings with both candidates, Owen Paterson MP – a leading member of the Cornerstone Group failed to get any assurances from Cameron that the current Conservative Party commitment on repatriating the EU's Common Fisheries Policy would be honoured.

On the other hand, David Davis has decided, unequivocally, to support the existing policy and, in particular, to back the terms of the letter offered by Michael Howard on 10 June last year, addressed to John Whittingdale, OBE MP, then shadow agriculture and fisheries minister, after a meeting between Mr Howard and Messrs Whittingdale and Owen Paterson MP.

To remind readers, the text of the letter was as follows:

You told me this evening that a number of those in the fishing industry have commented on my remarks on the Today Programme this morning. I thought it would therefore he helpful if I reiterated the position which I set out very clearly in Dundee and in my subsequent visits to fishing communities during this campaign.

We are determined that the next Conservative government will establish national and local control over fishing. We intend to raise this in the Council of Ministers at the first opportunity and I believe we can achieve this through negotiation. However, should negotiations not succeed, it remains the case, as I said in Plymouth, that the British Parliament is supreme and we would introduce the necessary legislation to bring about full national and local control.

In June, when I received a copy of this letter, I wrote that I could not stress enough the historic importance of the document. The sentiments were not new but this was an absolute commitment from the Leader of the Opposition that, if elected to government, he would seek repatriation of an important EU policy, by invoking the supremacy of the British Parliament. Now, we have that same commitment from David Davis.

The importance of the commitment is, of course, that this is not just about fishing. It does two things. Firstly, it underlines the supremacy of parliament, reaffirming that the UK is – for as long as Parliament is capable of repudiating an EU treaty provision – still an independent nation.

Secondly, it challenges head on the central dogma of the European Union, the "irreversibility" of the acquis communautaire – the body of law, including the treaties, which gives the Union its power. By seeking to overturn just one part of it, through the fishing policy, we hope to “breach the dam”, whence we expect the acquis to start unravelling.

To that extent, the fishing policy is the Trojan horse, starting a process of what we have termed reverse engrenage, mirroring the way the step-by-step process by which integration has been implemented.

How ironic that one of the most contentious issues to be negotiated on Britain’s entry to the then EEC was fishing and how delicious it would be if that same issue became the key to Britain's departure from the EU. With David Davis at the helm, therefore, there would indeed be clear blue water – between us and the EU.