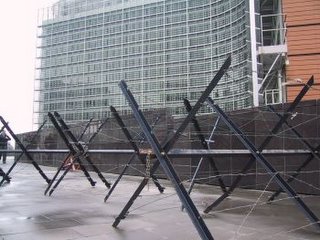 If not in actualité, the picture to the left of Berlaymont must accurately reflect the state of mind of its denizens, following the release of the latest Eurobarometer "snapshot" of opinion on the EU.

This is according to The Business, this morning, which reports that the survey has found confidence in the EU in freefall across almost every member state. It represents a "cascade" which, says the research firm that conducted the study, is the most severe since records began in 1975.

Furthermore, the survey reveals that that only one-third of Britons see benefit in continued membership, the lowest in the 25 countries polled. Overall, trust in the EU commission has plunged from 52 percent to 46 percent throughout the union and, in Britain, the picture is even bleaker for our government across the water. It is trusted by only by 31 percent and distrusted by 38 percent. A majority – 42 percent to 40 percent – believe the UK has not benefited from its 30-year membership and only 36 percent of those questioned considered membership "a good thing".

The full 440-page report is available on the Eurobarometer website and even the selective optimism cannot conceal a picture of unremitting gloom.

For the Tory leadership contest, the report has some considerable significance. Compared with the tentative steps suggested by the candidates to effect a selective withdrawal from the EU, the survey shows that public opinion is way ahead of what is on offer. Arguably, the two Davids are misreading public opinion and risk missing the boat.