As advertised by Booker 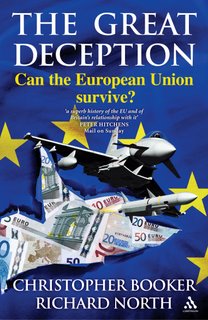 As a tailpiece in his incredible shrinking column, relegated to the penultimate page of The Sunday Telegraph, Booker has managed to get in a plug for our new edition of The Great Deception. He writes:

Last weekend at the annual conference of the Bruges Group, Dr Richard North and I launched a new paperback edition of The Great Deception, our best-selling history of the EU (Continuum, £9.99). This has been extensively revised and updated, to include the story behind the rise and semi-fall of the EU constitution.”

When the first edition appeared in 2003, it was praised by historians and commentators as by far the fullest and most revealing account of the "European project" to date, and sold more than 10,000 copies.

Last weekend all 50 copies of the new edition on sale were snapped up. But anyone who tries to order it via Amazon must be careful to look for the new subtitle "Can The European Union Survive?" Thanks to the legendary idiosyncrasy of that computerised bureaucracy, it still shows the cover of the old edition, by which some readers have already been misled.

To assist our readers, the correct cover is shown above. Most of our readers will easily recognise the aircraft and some may be able to identify the missile – it is of course the French-designed Meteor air-to-air missile. Its appearance on the front cover of our new book, substantially updated from the original, is not a coincidence.