The government gets away with it 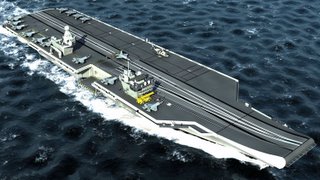 Looking at the print edition of The Sunday Times this morning, I could not help but feel a little smug on seeing the headline, "Carrier delays put navy's air defence at risk". After all, I did this story on 29 October, nearly a full month ago.

At least, I thought, the paper did run the story, albeit tucked into the gutter on page 8, leaving the front page to a photograph of the rowers who plan to cross the Atlantic in the nude.

Referring to the online edition for a link, however, put a different perspective on the Times's "scoop". It had been replaced by a much, much more important defence story, headed: "MoD probe into naked marines' initiation fight", the writer slavering over the details of "naked marines" shown "reportedly cheering as two new recruits are ordered to fight each other."

Being far too serious, the carrier story had been relegated to three short paragraphs at the end, the only new fact surviving being the news that the overall cost of the ships is predicted to climb from £2.8 billion to as much as £4.2 billion.

In a week where there have been important, even sinister developments in the (lack of) defence of our nation, the government must be counting its blessing that the media is so utterly useless on defence issues, and so easily distracted by by trivia.

It is to Booker in his Sunday Telegraph column, therefore, that adult readers must turn for some serious defence news – having got past the front-page story on sex slaves, which no doubt had readers enthralled.

Booker weaves together the pieces that have appeared on this blog, writing that last week moved up by several notches the slow-motion catastrophe unfolding over Britain's defence policy, ending our "special relationship" with the US and committing us to total dependence on our EU partners:

First, EU defence ministers confirmed their moves towards creating a "European defence industry", which is in practice committing Britain to waste billions of pounds buying equipment from our EU partners, when we would formerly have bought superior and cheaper equipment made in the US or Britain.

Second, President Bush had to cave in to the US Congress's wish to end the release to Britain of sensitive technological information, on the grounds that we can no longer be trusted not to pass this on to other EU countries or China. This spells an end to such joint Anglo-US defence projects as the F-35 joint strike fighter.

Third, the Ministry of Defence provided "non-answers" to questions put by MPs, including the Tories' front-bench spokesman Gerald Howarth, on the recent decision, revealed in this column, that we are to lose our last explosives-making facilities, making us wholly dependent on explosives imported from abroad. The MoD refuses to say where all the explosives for Britain's Armed Forces will in future be made.

Meanwhile the National Audit Office covered up for the MoD by producing a joke report on various recent defence projects. It congratulated the MoD for bringing in on time the Javelin anti-tank missile, without admitting that this has been available since 1996, and that we only bought it from the US after wasting £109 million on a Continental version that did not work.

The NAO approved the Army's biggest ever truck purchase from the German firm MAN, without pointing out that the trucks failed to meet specification and that better vehicles could have been bought from two US-British consortia. The report congratulated the MoD on "saving £157 million" on its order for a French missile for the Eurofighter, without pointing out that it could have saved £900 million by buying the US equivalent.

The NAO also fell for MoD spin that it had "saved £145 million" by reducing the efficiency of its three planned Type-45 destroyers, equipped only with French anti-aircraft missiles and costing £1 billion each. It did not explain that we could have followed the example of the Australian Navy by buying US-designed ships, British-built and equipped also to fire cruise and anti-submarine missiles. Complete with missile systems, these would have cost only £600 million each, saving £1.2 billion for much more capable ships.

Finally the Queen gave Royal Assent to the MoD's scrapping of our last county-based infantry regiments, to be merged into new "large regiments" to fit the British Army to the needs of the "European Rapid Reaction Force".

Not a good week, concludes Booker. "But the Government gets away with it, not least because defence now arouses so little interest," he adds. How appropriate that the Sunday Times is so quick to prove his point.