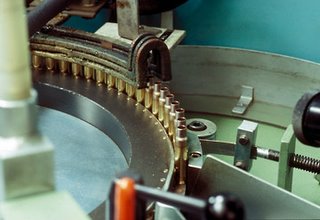 Well, the new dumbed-down Sunday Telegraph is with us and, entirely in keeping with its editor’s desire to make it "intelligent and elegant", the front page is graced with a picture of Kate Moss, coke-snorting supermodel, in exotic lingerie.

Meanwhile, exiled to its new home on the inside back page is the truncated Booker column, with a story which, in a serious – as opposed to an “intelligent and elegant” newspaper, would have been on the front page.

Crammed into 500 words is a story which completes with such delights as the page three "Harry Potter and the Goblet of fear", occupying a full half page, with pictures and the stunning revelation on page five that "William beats Harry in Army intelligence test".

And the trivia consigned to page 37? Oh, that's just a boring little tale about how BAE Systems is closing down the last factory in the UK that makes military explosives, and another which makes a key component from rifle ammunition, moving the production to France.

Even the headline is calculated to inspire ennui in Mz Sand's "intelligent and elegant" newspaper, asking "Is it wise for an army to buy its shells abroad", a headline which also manages both to downplay the gravity of the issue and get it wrong.

Picked up by us on Tuesday and run on this Blog, the issue is, as Booker records, BAE Systems’s decision to close the former Royal Ordnance plants at Bridgwater, Somerset, and Chorley, Lancashire, incidentally with the loss of 200 jobs.

At the Bridgwater plant is made a range of military explosives, needed for shells and missiles used by Britain's Armed Forces, including components for our nuclear weapons. At Chorley, an equally vital function is carried out – making the "initiators" for rifle cartridges – the tiny blob of explosive in the base of the cartridge which explodes when struck by the firing pin, setting off the propellant charge.

As regards the Chorley plant, Union officials have told us that, for the last two years, senior production staff have been seconded to a factory in France to set up new machinery and teach the staff there how to run it – concrete evidence that the production is to be moved to France.

But the “smoking gun” seems to be an agreement which approved by the French Senate on 7 May 1998, the record of which shows that it was planned to set up a joint company between BAE Systems and the French state-owned Société Nationale des Poudres et Explosifs (SNPE), to manufacture “powders and explosives”. But the killer passage (machine translation) is this:

The Minister for defence moreover specified that a majority of the activities of production would be maintained in France and that Royal Ordnance would reduce the share of activity of its own installations in Great Britain (Bridgewater and Bishopton) or in the Netherlands where it also has a factory (Muiden). He however added that alliance would modify the distribution of the activity between the three French sites: the site of Angouleme, which is depend on the markets of the armament, would be private of part of its activity since 1999 whereas the establishments of Bergerac and Sorgues would profit from the clear creation of a hundred employment.

We contacted both BAE Systems and the MoD, asking specifically what was to happen to the production from Bridgwater and Chorley, and neither answered the questions we put to them. Alerted by us, however, Gerald Howarth, the Tory defence spokesman, has tabled a series of urgent questions to the MoD on the implications of this decision. "The prospect of Britain being unable to supply its Armed Forces with explosives and ammunition and being dependent on other countries," he warns, "is extremely alarming."

However, such is Mz Sands and her quest for "intelligence and elegance" that it will have to be other newspapers - and, of course - this Blog, that keep you appraised of the responses.