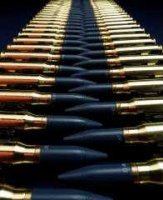 Few stories I have reported over the years, Christopher Booker writes in The Sunday Telegraph have been more significant than my revelation last week that Britain's Armed Forces are for the first time in history to become dependent for their ammunition and missiles on explosives imported from abroad. The planned closure of our last two Royal Ordnance explosives factories means our forces will be unable to operate without the tacit consent of foreign governments, notably that of France.

Booker is picking up on the story rehearsed on this Blog earlier this week, which is hardly surprising as, amongst my many day jobs, I provide a research function for the column.

Thus, reports Booker, duly informed by the Blog, almost the only paper which picked up on this was Defense News, the leading US defence journal. Meanwhile it was not denied in the carefully worded answers given to questions I put to BAE Systems, owners of the plants due to close, and the Ministry of Defence. He continues:

BAE Systems refuses to admit where it plans to source its explosives (although it is now in partnership with a French state firm which boasts of creating hundreds of jobs). It merely insists that the MoD has approved its plans as being aligned with the ministry's "defence industrial strategy".

Since the MoD is now sourcing most defence contracts with our EU "partners", in line with its policy of European defence integration, this is hardly surprising. The MoD itself merely says it is "confident that BAE Systems has in place a robust supply chain for the delivery of general munitions with alternative sources in place to guarantee continuity and security of supply".

The MoD also announced last week that it is to close large parts of its aviation and military repair and engineering services, with the loss of 1,900 jobs. The Army's engineering service was part of an Anglo-US consortium bidding for the Army's biggest-ever trucks order, which would have created 600 British jobs.

To the surprise of defence experts, this £1.1 billion order went instead to a German firm, Man-Nutzfarzheuge, now boasting on its website that this will "safeguard jobs" in Vienna. Considering the huge price we are now paying for it, the MoD must be delighted that its new "Europe-first" policy continues to attract so little public notice.

Needless to say, the very idea that a "Europe-first" policy exists is hotly disputed, strangely by defence industry sources as well as the MoD. In response to my article in The Spectator on 15 October, Nick Prest, former chairman of Alvis Plc and the Defence Manufacturers Association takes me to task in a letter, published 5 November.

Writing as someone who has been in a senior position in the UK defence industry, he says, I do not recognise the picture painted by Richard North of a UK government policy of "Europe first" in defence procurement. Where he cites particular decisions on armoured-vehicle programmes as evidence of this policy he has simply got his facts wrong. Prest continues:

The UK approach is, broadly, to source from UK companies where the right equipment is available at sensible cost. When it is not, the MoD looks mainly to the US, but also to Europe, for allies with advanced technology to fill the gap. Which way to go on an individual project is a function of cost, technical performance, risk, employment and industrial considerations, and a desire to keep some balance between transatlantic and European commitments.

In this sense, UK policy on defence procurement is a microcosm of broader national policy, which is precisely not to choose between US and European destinies. Nothing discomfits Whitehall more than the idea that one day it may have to. Until now this has been a broadly sensible policy in defence procurement.

The real and interesting question is whether it will continue to be. Because of rising costs and shrinking budgets, the UK is increasingly looking overseas for defence technology. But the US relationship is an unequal one. We need their technology much more than the Americans need ours. As a result, the US is loath to share key aspects: for example critical software for the Joint Strike Fighter. Without this the UK does not have sovereign use of a system which could be fundamental to national security.

For all the difficulties in funding and efficiency that afflict European co-operative programmes, it is at least possible to establish true reciprocity in technology exchange. But while continental firms are consolidating in Europe, UK firms are focusing their efforts mainly on the US market. This, in the long run, combined with the UK's commitment of resources to transatlantic programmes, may make it more difficult for the UK to participate as a full partner in European defence technology development. Then we may not get what need from either flank. In the words of the Swahili proverb "he who rides two horses breaks his backside".

One suspects that Mr Prest has neither read my full paper The wrong side of the hill , or Christopher Booker’s recent columns, otherwise he could hardly have missed our finding that excess costs of the "Europe-first" policy exceeds £5.8 billion, plus another £8 billion to come on excess spending on the FRES programme.

It remains a mystery, therefore, why senior figures throughout the defence establishment are so keen to deny that which is demonstrably provable.

What is interesting, though, is Prest's comment that continental firms are consolidating in Europe, while UK firms are focusing their efforts mainly on the US market. Coincidentally, this is borne out by a long "puff" in The Business, headed "Finmeccanica aims to become a global force".

This story is about the Italian state-owned aerospace compnay, Finmeccanica, the owner of helicopter-maker AgustaWestland, which, says The Business, "claims the UK as its 'second home base'".

But, we are told, the Anglo-Italian aerospace and defence company has ambitions well beyond the boundaries of Europe: it has set its sights on far flung frontiers including Russia, China and America.

All this looks very good, especially as, in China, it is involved in a joint venture, setting up an assembly line for the production of 109 civil helicopters while, in America, Finmeccanica’s aerospace division Alenia Aeronautica is in line for a good share of work on the 787 Boeing, the new Boeing flagship. And it is also aiming to capitalise on the special relationship between the UK and US that Finmeccanica to bid in a new $13bn competition for about 150 combat search and rescue helicopters.

And, closer to home, the piece concludes, Finmeccanica intends to be at the forefront of European defence consolidation. As Remo Pertica, co-chief operating officer, told The Business last week: “We think we could play a very important role in European aerospace and defence.”

Now go back to January 2002 - a year after Westland had been “merged” with the Italian helicopter maker Augusta, and taken over by Finmeccanica - and look at the practical implications of this “European defence consolidation. Headlines at the time were blaring, “Westland announces 950 job losses”, followed in March by a perceptive piece in Aviation Today.

The rationale behind the merger, it wrote, has been neither clear nor convincing. Although AgustaWestland was a single entity, the 950 jobs to be cut at Westland were not spread across the board to the Italian partner, nor was any work being transferred from Italy to take up the slack at the British factories. 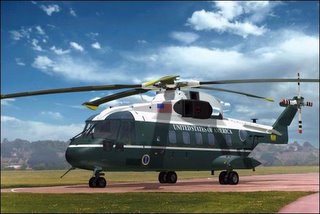 Then, when in January 2005, AgustaWestland US101 was selected by the US Navy for the
presidential helicopter replacement programme, the company celebrated by announcing another 640 job losses at Westland.

A week previously BAE systems announced 2,000 redundancies across the country, all at a time when our purchases from European suppliers have never been higher.

Booker’s story this week, redolent of the chaplain at Pearl Harbour in December 1941 who was heard chanting "praise the Lords and pass the ammunition," is headlined: "Pass the ammunition, s'il vous plait", a clever play on words which sums up the fact that we are now reliant on the French for crucial war supplies.

But, if we are importing the material, we are also exporting the jobs. And all we get are denials.