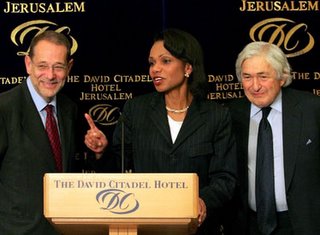 For reasons that may not be entirely clear to everybody, Secretary of State Condoleezza Rice has made the progress on the Palestinian state her very own project. Maybe, having been known as a Russian expert and having not managed to understand the European Union, she is enlarging her specialist expertise.

Whatever the reason, she postponed a trip to the APEC meeting, to stay in Jerusalem and beat her way through to an agreement on the Rafah crossing between Gaza and Egypt.

Secretary Rice has spoken soulfully of the various things the Palestinians, especially in Gaza, need, in order to achieve economic and political progress, saying of the latest agreement:

“This agreement is intended to give the Palestinian people the freedom to move, to trade, to live ordinary lives.”

Somehow, she forgot to mention that one of the things they need to achieve all of that is a little less fighting between the various militant groups.

She has tried to put pressure repeatedly on Mahmoud Abbas to stand up to militant groups but neither the pressure nor Abbas’s own rather vague promises have achieved anything. In fact, according to Reuter’s

“In a sign of tensions, President Mahmoud Abbas, in a speech after the Gaza deal was unveiled, accused Israel of trying to avoid peace talks and incite Palestinian civil war by insisting that militants be disarmed before any negotiations on statehood.”

Pretty unreasonable, I call it. Anyway, after long negotiations that have left the Secretary of State looking less than her usual radiant self because of lack of sleep certain arrangements have been achieved and the EU is very much part of it.

The Rafah crossing will be open and will be monitored by Palestinian border guards and European Union security forces, so far unspecified. The Israelis had tried to insist that they be given real-time video information about crossing as they are worried about arms and terrorists being smuggled through Rafah.

The Palestinians have insisted that Israeli presence would impinge on their sovereignty. Reuter’s reports:

“The deal also includes video surveillance of the Rafah crossing to Egypt by a joint EU-Palestinian team.

Israel will have access to the video via the Europeans, but will not have veto power over individuals moving through Rafah, as it had wanted.”

One hopes that the first terrorist atrocity carried out by someone who was allowed through Rafah will produce a certain amount of soul-searching but one does not hope too much.

Other aspects of the deal include travel for Palestinians between Gaza and the West Bank some time in the near future, the building of Gaza seaport and a possible airport (presumably on international money), and “allowing the urgent export from Gaza of all the agricultural produce of the 2005 harvest”.