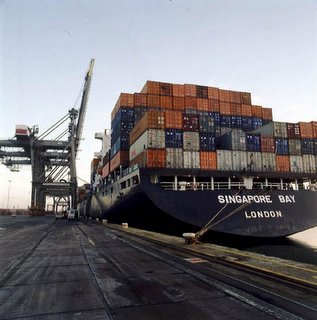 This is definitely one of those issues where, if you think you know what is going on, you haven't been listening. But the one thing which is certain is that the latest trade talks on the Doha round of WTO negotiations, due to climax in Hong Kong next month, have gone belly-up and everybody seems to be blaming the EU – except the EU of course.

As we left it in early October, a breakthrough was in the offing on the previously stalled talks, with US trade representative, Robert Portman, leading the way. He came up with an offer to cut "the most trade-distorting American farm support" by 60 percent by 2013, reducing the US "subsidy ceiling" from $19 billion a year to $7.6 billion.

This was conditional on the EU following suit with an 80 percent reduction, to which the EU trade commissioner Mandelson responded. He called the US offer "constructive” and announced a plan to cut EU agricultural subsidies by 70 percent and to set a ceiling of 10 percent for industrial tariffs. He was then roundly condemned by L'Escroc Chirac, who accused Mandelson of exceeding his mandate, whereupon the trade commissioner promptly did a handbrake turn, covering his tracks in a welter of incomprehensible detail.

However, even Mandelson's genius for spin has not been able to conceal that France, which receives around 21 percent of EU farming subsidies, placed further shackles on him. It threatened to use a veto if France found the outcome of the talks, currently being held in Geneva, unacceptable.

As it stands – although not even the specialist journals appear to agree – while the US offer has remained on the table, the EU is offering a range of tariff cuts of between 35 and 60 percent, each applicable to different goods, averaging out at 46 percent – or 38 percent, depending on which source you read - across the board from a very high base.

Whatever the actual rate, that is very far short of the minimum acceptable 54 percent that the developing countries, backed by the US, are asking for, especially when, according to the US agriculture department's foreign service administrator, Ellen Terpstra, the US actually has an average tariff rate of 12 percent, compared with the EU average of 31 percent.

So it is that, this morning, The Times is recording that "squabbling ministers from key trading blocs" are blaming each other after hopes of a breakthrough evaporated. As the latest impasse, says the paper, raised fears that the Hong Kong meeting may end in debacle like the previous WTO ministerial summit, in Cancún in 2003, and raise doubts over the WTO's viability.

Reuters has Brazil's Foreign Minister Celso Amorim accusing the EU of coming up with nothing new on agriculture, complaining that the way out of the tariff impasse "fell on deaf ears" with European negotiators.

The Australian Daily Telegraph is more robust, reporting: "Dismay at EU tariff 'obscenity'", citing Geoff Raby, deputy secretary of the (Australian) Department of Foreign Affairs and Trade, claiming that the EU was unable to cut agricultural tariffs to free up world trade because it lacks the political will to take on wealthy farmers.

He is warning of a potential "train smash" for Australia when trade ministers meet in Hong Kong, also branding Switzerland, Norway and Japan as "intransigent" in negotiations and attacking their defence of protectionist policies as an "obscenity".

Altogether, no one is particularly surprised at this turn of events, and a failure next month will accelerate the trend towards bi- and multilateral trade agreements outside the framework of the WTO. Meanwhile, shackled to the EU, we continue to be lumbered with a policy designed for France, leaving Blair's attempts to aid developing countries, through liberalising trade, in tatters.

At this point, one collapses, jibbering, Doha… ha, ha, ha…