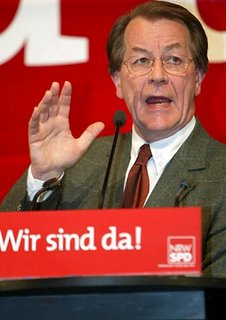 The German coalition negotiations may be in jeopardy and there are vague talks about the possibility of another election. They will vote and vote until they elect a government.

The latest crisis or possible crisis was caused by the president of the Social Democratic Party, Franz Müntefering, announcing that he would not run for the position again. His anger was caused by the fact that his nominee for the party’s general secretaryship, Kajo Wasserhövel, was defeated by the left-wing former leader of the youth wing, Andrea Nahles.

All in all, this shows a certain fractiousness within the party, with the older generation like Schröder, who is largely out of the game, and Müntefering being shouldered aside by the younger, more extreme left-wing sections. These oppose vehemently the rather tame reforms introduced by Schröder. They will certainly be against any possible reform agenda that the two big parties have to agree on.

The coalition talks are supposed to end on November 12 in time for Angela Merkel to be elected as Chancellor by Parliament. Müntefering had been expected to become Vice Chancellor and Labour Minister. Now all bets are off.