Meanwhile, back in Germany 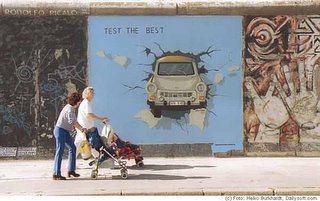 No, not riots, not even, it would seem, copy cat ones (I may be speaking too soon on that) but the usual run of the mill, stuck in the mud political negotiations.

The time is approaching for the grand coalition to take shape but as we have written before, this shape ain’t taking. In yesterday’s Wall Street Journal Europe [subscription only] there is an interesting article by Mariam Lau, op-ed page editor of Die Welt.

Entitled The Bossis, the piece points out that there has been a recent shift in political opinion about the East. The ossis are moving into mainstream political life and taking over. Not only is Angela Merkel a scientist from the former DDR but so is the newly chosen SPD chairman, the Brandenburg governor, Matthias Platzeck. While Ms Merkel has a degree in physical chemistry, Mr Platzeck is an engineer for biomedical cybernetics.

In the old DDR it was scientists rather than “teachers and jurists” who took political posts, says Ms Lau. There are other scientist ossies at the top of the political tree: Thomas de Maizière, the new secretary of the chancellery, Wolfgang Tiefensee, designated minister for transport and others.

Their background is not dissimilar. They come

“from politial and/or religious families, which upheld a bourgeois tradition in the hostile climate of an ‘Arbeiter und Bauernstaat’ (state of workers and peasants). None of them was a hero of the East German ‘revolution’. They came to the civil rights movement relatively late in time. This is why some of the 68ers accuse them of cowardice. That’s hard to swallow from a generation whose own claim to ‘resistance’ credentials is rooted in street-fighting the democratic government of Willy Brandt – himself a former refugee from Hitler’s Germany.”

It is not clear which came first the rise of the politicians from the former DDR or a more benign view of the eastern part of the country but both exist now, according to Ms Lau, with newspapers and their readers speaking hopefully of “Aufbruch Ost” (Rise of the East).

The tabloid Bild proclaimed very quickly after Mr Platzeck’s appointment: “The Ossis Are Our New Bossis!”

But coming after the ridiculous split in the SPD, which led to Franz Müntefehring’s resignation as chairman and the even more ridiculous retreat by Edmund Stoiber back to Bavaria, the new kids on the block do not look bad at all.

“Ms Merkel and Mr Platzeck share a pragamatic, can-do attitude and a lack of patience for ideology. They have no take in the enduring battles between the ‘68ers’ and the conservatives that the West Germans are so fond of fighting. In the very same week that the famous Frauenkirche in Dresden was formally reconsecrated – when East and West Germans were praising technicians, engineers and civil society rather than nursing old resentments – it seems that that the Federal Republic as we knew it has finally come to an end.”

Ms Lau’s indictment of the wessie politicians is harsh:

“The rise of the Bossis is more than pure coincidence. What happened in Berlin last week was a clear failure of the West’s political elites, who put their own needs, careers and moods before the interests of their parties, let alone the country as a whole.”

Will the Bossis be any different? For the moment, Angela Merkel appears to be an honest, if somewhat bemused politician, who is prepared to do her best for the country and not just because her own background is different from those of her western colleagues, castigated by Mariam Lau.

How long that will last remains to be seen. And, above all, will the Bossis promulgate the desperately needed reforms and fill the vacuum that exists at the heart of the German political establishment? They are in a good position to do so, thinks Ms Lau. But if not … well, France is not the only country that has riots in its history.