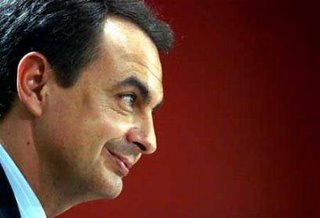 Last weekend, in case you had not noticed, was the Euro-Mediterranean Summit in Barcelona. And, according to The Spain Herald it at least served one purpose.

It made us realise, says the paper, that Prime Minister Zapatero gets supremely bored during these international summits. This they learned this thanks to an "indiscrete microphone" that picked up his conversation with a staffer who said "I'm going to find you an interview so you don't get bored stuck here for four hours." Clearly, those working for the Prime Minister know him well. The Spanish Prime Minister cares nothing about what comes of these Summits. He goes to the photo session, passes the time and that is that.

In full flight, the paper continues:

The "indiscrete microphone" in Barcelona, far from being anecdotal, has revealed this Prime Minister’s frivolous attitude toward his job. Where is he defending Spanish interests? Where is his concern for upholding principles that benefit Spain? Where is his drive to put Spain's general interests above his own personal goals? Zapatero has no clue how to negotiate international forums (we already knew this), but now we find out he does not even have the least concern in gaining a presence in these world events. We always had the impression the Prime Minister was like "an octopus in the garage", but now we have proof.

Zapatero gets bored at these Summits and cares little about their results. What the conclusions say is of no consequence. The only important thing for the Prime Minister is being able to "sell something". The content doesn't matter. Zapatero and his aids have show us their rude and simplistic natures.

Zapatero’s exceedingly low political profile is worrisome. And it is noteworthy how little ambition this man has to secure Spain in a privileged spot on the international political scene. What, then, interests the Prime Minister? Such a lack of seriousness is frightening. Moreover, knowing that in Brussels negotiations are beginning over the EU budget and how to divide up the funds, we can have very little hope that this man, who cannot negotiate and lacks the bravery to defend our interests, will accomplish much for Spain. Zapatero is bored. And that says it all.

Actually, he is not alone. We know from past reports that Blair gets extremely bored as well, and he can hardly be the only one, as the Zapatero account reveals. What a way to run a railway, though – a group of bored men (and the occasional woman) gathered round a table talking at each other, each wishing they were somewhere else.

Mind you, we are with Zapatero on this one. We know exactly how he feels, and all we have to do is write about what goes on.