Our unaccountable masters: No 2

[Some of our readers would have followed the link to OneLondon and read this posting already. However, OneLondon is a somewhat more official blog than this one and the posting had to be removed. We have decided to put it up in its entirety on this blog.] 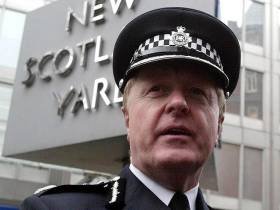 Plod Blair (Sir Ian of that Ilk) has called for a “public debate on the kind of police service Londoners want”. It is not entirely clear why he needs a public debate, as the MPS (or the Met as we used to call it) has been doing nothing but consulting with various people and organizations about policing. In fact, at various times they have been overwhelmed by comments from Londoners (though, presumably, these were not stakeholders and, therefore, of not importance) of what kind of police service they want.

We want the kind of police service that is visible in a slightly different way from the way it is now. In other words, we want police officers on the beat, paying attention to what is going on around them, not chatting to each other or playing with their mobile phones.

We want the kind of police service that does not cheerfully tell us that it is entirely our own fault if our houses are burgled, our cars are vandalized, our mobile phones are stolen and our children are attacked on the way home from school. And there is nothing they can do about it.

We want the kind of police service that does not respond with a “well what do you expect” type of shoulder shrugging or a merry laughter when a crime is reported.

What is there to debate?

And I can also tell Plod Blair what kind of police service we do not really care for. I found myself in genteel St James’s Square earlier today. Across the road from Chatham House (The Royal Institute of International Affairs) there was a tiny, well-behaved demonstration of people shouting: “Poland stop your homophobia”. I assume an important Polish speaker was addressing the RIIA and a dozen people decided to demonstrate.

One side of the square and the street beside it was filled with police officers of every variety, some standing around, some chatting to each other, some exercising their ability to communicate with the community at large, by chatting to local shopkeepers.

I stopped to count the number of officers, whereupon one of them asked me what I was doing. I told him that there were more officers than demonstrators. He grinned widely and said that I was wrong: there were fourteen of them and only thirteen police. At that point another car drew up and disgorged two more of London’s finest.

Earth to Plod Blair (Sir Ian of that Ilk): we do not want this kind of police service!

Nevertheless, the Metropolitan Police Authority (MPA), which supposedly supervises the MPS, without being able to do much about it or being accountable themselves to anybody, is very excited about the debate. It has held a conference, during which there were workshops, showcasings of “emerging models of local engagement” and discussions with stakeholders.There was also an intention to

“… review the role of borough-wide Community Police Consultation Groups (CPCGs)and discuss the new Safer Neighbourhood Community Panels and how they will relate to existing consultation methods.”

Jolly good. Will this reduce the crime rate or increase the clear-up rate? Don’t bother me with facts.

Catherine Crawford, the MPA Chief Executive issued a statement before the conference, the first paragraph of which shows the lady to have a very poor grasp of grammar but a good knowledge of meaningless jargon:

“If Londoners are to truly engage in the future of policing, and if citizens are to be truly at the heart of everything that the police do, this conference is particularly timely in discussing how we can do this in a real, productive and ongoing fashion.”

Sheesh. All we want is not to have our homes broken into or our children attacked on the way home from school.

Meanwhile, Plod Blair (Sir Ian of that Ilk) has taken time out from meetings with supermodels on the subject of their possible drug-taking (as Kate Moss has not been charged we must assume the evidence is negligible and the Superplods were wasting their time) to deliver this year’s Dimbleby lecture on the subject of policing.

Plod Blair, let us recall, was the man who went on radio to tell the world that the Met … woops … sorry …. MPS set a golden standard in counter-terrorism. The date? July 7, 2005. The time? Around 8.30 am, that is an hour or so before four bombs went off on London transport, killing over 50 people and injuring several hundred more.

Did the man ever apologize for his arrogance and inefficiency? Not on your life.

Plod Blair’s deputy it was, who told us on the same day that the words Islamic and terrorism cannot be used in the same sentence. Did he ever apologize for his stupidity? Don’t ask silly questions.

I may add that so far as anyone knows nobody has been arrested in connection with the 7/7 bombings.

Then came July 21 and London became the first city outside the Middle East to have had two bomb attacks within two weeks. Luckily for us, the second wave of would-be bombers consisted of complete amateurs.

Then came the infamous episode of the Brazilian electrician, the complete and utter mess made by the MPS and Blair’s attempts to cover up and deflect justice.And then came the endless demands for more power to the police and the disgraceful political campaigning for the 90-day detention clause in the government’s Anti-Terrorism Bill.

In the meantime, the crime rate in London, whichever way you fiddle the figures, keeps rising, even though people have given up reporting anything they do not need to report for insurance purposes. Violent crime, which is still reported, is on the rise. Well, what kind of policing do Londoners want, Sir Ian?

The Dimbleby lecture was an extended repetition of the same question: what kind of policing do Londoners want and how is it to be decided. The presumption is that Londoners want tougher policing and more power to the police. Well, errm, not necessarily. We want more efficient policing. But what are we to make of paragraphs like this one:

“In 2012, we will want Britain to be an open, diverse society, withequality of opportunity and freedom of movement for all, with the Olympics demonstrating and showcasing that Britain. Events in Paris - and in the Lozells area of Birmingham - show how fragile that vision might be and how incredibly important policing is to its realisation. The connection between the environment that local policing can engender and the way in which the Olympics will be policed is absolutely clear. The Olympics will not take place in a vacuum: they will be policed in a manner reflective of a wider Britain.

Who will decide? The police, the government, the media or you? This is not a time for a Royal Commission but for open thought. It is a time for politicians and commentators of every stripe and opinion actively to consider how citizens can be involved in a debate about what kind of police service we want. We need to embed the citizen in everything we do: we could make a small start, for instance, by insisting that the shortly to be created National Policing Improvement Agency should have a permanent and powerful citizens panel.”

It seems that nothing much counts until the wretched Olympics.But what is Plod Blair proposing? Well, not a lot, apart from the National Policing Improvement Agency, that is. We shall have lots of consultations and the public must get more involved. One could argue that since the public tends to be at the receiving end of both the crime and the run-amok policing that closes off whole streets for days on end because of an accident, it is already involved. But no, that is not good enough for Sir Ian of that Ilk:

To which most of us would say: just do it. Stop concentrating on minor traffic offences, stop rolling out in enormous force every time a dozen people decide to demonstrate about some political issue, stop playing with endless toys. Find out what is going on around you, try to prevent crime and catch those responsible if you have not managed to do so. Not easy, perhaps, but nobody forced you to put that uniform on.

It seems, however, that Plod Blair and his friend PM Blair have their own ideas of what the police should be doing. Sir Ian quoted from the 1997 statement by the then incoming Labour government. According to this the “overarching purpose of the police service” is:

“… to build a safe, just and tolerant society, in which the rights and responsibilities of individuals, families and communities are properly balanced, and the protection and security of the public are maintained.”

The police service is there to build some kind of a society? The last time I read anything like this was in the instructions handed out by “Iron” Felix Dzerzhinsky, the founder of the Cheka (subsequently renamed many times and now known as the FSB) to his “knights of the revolution”.Have we really come to a situation in which the Commissioner of the Metropolitan Police (oh all right, the MPS) echoes the founder of the Soviet secret police?