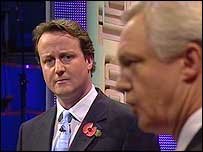 In what was an unprecedented television debate, the two contenders for the Tory leadership came together last night on the BBC TV programme Question Time.

A quick straw poll carried out by this blog suggests that David Davis had the better of David Cameron, coming over as more decisive and knowledgeable, although Cameron's presentation was flashier. Certainly, of the early papers, The Independent seems to agree that Cameron came off worse.

The Guardian seems to reserve judgement but both papers home in on a voluble man in a tweed jacket who told Cameron, "I've listened to you, and you're good on your feet, I give you that - I used to lecture, and you're good, not as good as I was, but good. But you waffle. You don't tell us how you're going to do things!"

On the European Union, though, both were as useless as each other. Cameron, on the one hand, confined himself to clawing back powers only on employment and social legislation while Davis was much more comprehensive, excluding nothing other than the single market.

But the million dollar question was how would the achieve their aims. Would Davis leave the EU if he wasn't given what he wanted? That would not be necessary, he said. A refusal would create a crisis and, out of crises, things emerge. Cameron would do it all by negotiation, citing the Thatcher "handbag" ploy that she used in negotiating the British rebate.

But neither of the strategies is realistic. When John Major provoked a crisis in 1996 over the beef ban, the "colleagues" simply closed ranks, forcing him into a humiliating climb-down. And while Thatcher succeeded in her ploy, she could do so because the colleagues needed her agreement and she had a veto. When it comes to a treaty change, however, all the other member states have the veto and the UK would be the supplicant.

On this key issue, therefore, neither of the candidates impress. It is worrying that two politicians can climb so far up the Tory hierarchy yet still, apparently, have no idea how to deal with the EU. It does not auger well.

The programme can be watched on this link.