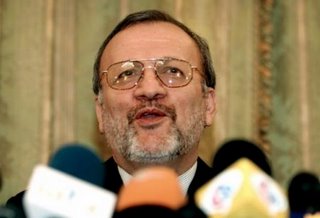 Manouchehr Mottaki, Iranian Foreign Minister, but also the Islamic Republic’s former ambassador to Japan and, before that, to Turkey, is planning a visit to the latter this week.

Mr Mottaki’s history is quite colourful. According to Iran Focus

“As a radical Islamist in his student days in India’s Bangalore University, Mottaki was a fervent supporter of Ayatollah Khomeini. He returned to Iran during the revolution and joined the ranks of the Islamic Revolutionary Guards Corps (IRGC) soon after the fall of the Shah’s regime in 1979. After taking part in the bloody campaign against Kurdish dissidents, Mottaki moved to the Foreign Ministry, where for some time he was the IRGC liaison officer.

Mottaki was appointed Iran’s ambassador to Turkey in 1985 and it was during his tenure in Ankara that the Revolutionary Guard-turned-diplomat became involved in a number of terror attacks and assassinations of dissidents, according to Iranian opposition figures and defectors. In the 1980s and the early 1990s, at least 50 Iranian dissidents were kidnapped or assassinated in Turkey by Iranian secret agents often working closely with diplomats from Iran’s embassy and consulates.

On Mottaki’s watch, the Iranian embassy in Ankara and the consulate-general in Istanbul were turned into safe houses for agents of Iran’s notorious secret police hunting down Iranian dissidents, according to exiles.”

In 1989 Ambassador Mottaki was asked to leave Turkey as his involvement with terrorist activity became known. Now he is returning for a visit, much to the dissatisfaction of human rights groups and Iranian dissident groups in the West.

Simon Bailey of the London based Gulf Intelligence Monitor maintains that this will not help Turkey in its efforts to strengthen its democratic credentials for membership of the European Union. But there seems to be little indication of the EU making any sort of representation on the subject. Mottaki is, after all, Foreign Minister and the EU never quarrels with anybody’s foreign ministers. Well, not with any dictatorship’s foreign minister. Some EU politicians do display a certain petulance when senior American politicians travel to Europe.