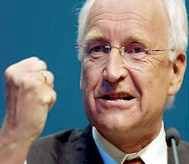 It never rains but it pours. Or whatever the German equivalent is. No sooner has Chancellor-in-waiting Angela Merkel heard of the disappearance of the Social-Democrat Chairman, Franz Müntefering, than she was told that the designated Finance Minister, Edmund Stoiber (left), has decided to remain in Bavarian politics.

In many ways this is quite a good thing, as his baneful influence has been seen in the watering down of all reform proposals that Merkel advocated at the start of her campaign. His replacement in the coalition, Michael Glos, though a senior member of the Christian Social Union (CSU) is unlikely to have the same influence or position.

Herr Stoiber’s immediate excuse was that with Herr Müntefering resigning, the SPD was no longer a predictable political force and could not be relied on to be a reasonable coalition partner.

Will the negotiations conclude by November 12? Will Merkel be formally elected to be Chancellor by the Bundestag on November 22? Can they find their way out of a paper bag? Who can tell?