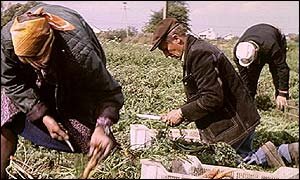 Old enmities die hard, and never more so than between Poland and Russia. Relations are already strained by a deal between Russian and Germany to build a $5 billion gas pipeline under the Baltic Sea, bypassing Poland and the Baltic states and taking Russian gas directly to western Europe - thereby depriving the detoured countries of lucrative transit fees.

This is on the back of Ukraine's "orange revolution", when Poland acted as mediator, and pro-Western Viktor Yushchenko beat his pro-Russian rival Viktor Yanukovich in the disputed presidential election.

Relations then worsened in May, when Polish President Aleksander Kwasniewski was snubbed by Russian President Vladimir Putin during a visit to Moscow to mark the 60th anniversary of the end of World War II.

But now, inexplicably, according to Polish foreign minister Stefan Meller, Russia has imposed restrictions on imports of Polish farm produce and meat.

So serious is the situation that, prime minister Kazimierz Marcinkiewicz is appealing to the EU commission to help sort it out, with the news agency AFX reporting that he has even made a public appeal on national radio.

The Russian authorities are saying that they have taken their action because of fraudulent practices among Polish exporters, including falsification of health and hygiene certificates, as if a member of the European Union could ever stoop so low.

In Poland, the restrictions are considered politically motivated and aimed as a test of the new conservative minority government led by Marcinkiewicz. "All the signs from Moscow must be analysed in a political context," Meller said in the Polish Rzeczpospolita daily. "If the incidents of which Russia accuses us did occur, they were already known," he said.

So far, there are no tanks massing on the borders but it remains to be seen whether the commission will intervene or whether, as so often is the case with the Eastern and central European states, their external relations are suddenly, in defiance of the Common Foreign and Security Policy, merely "bilateral" problems.