What a wonderful thought 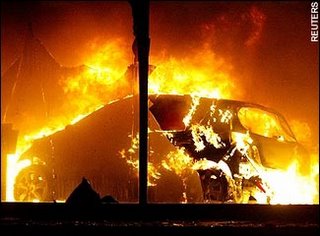 In today’s International Herald Tribune Catherine Field gives an interesting analysis of the French riots and their origin. [I may as well warn some of our readers that she does not think that it is an intifada or a jihad.]

Her suggestions of long-term answers are hit and mix in my opinion: breaking up the stranglehold of the enarques on public life is a good idea, an encouragement of social and political integration even better, but throwing more government money without economic and social reforms will do nothing.

A far more interesting exchange of ideas can be seen in the Letters section of the newspaper.

But Ms Field does come up with a wonderful couple of sentences:

“President Jacques Chirac is notorious for trying to foil investigations into his scandal-tainted financial past. Unsurprisingly, there were only guffaws when he warned rioters that France is a country where justice is firmly applied.”

The thought of l’escroc, who is hanging on to the presidency in order to keep himself out of the courts, if not prison, presiding over a state in which “justice is firmly applied” fills one with joyous laughter.