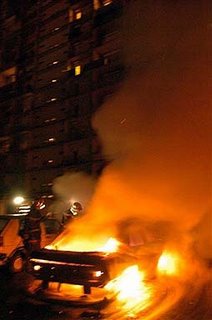 Andreas Noll provides a gloomy but balanced analysis on Deutsche Welle of the situation in France and the possible consequences to the rest of Europe. While not excluding the Muslim aspect of the problem, he sees it as essentially a European failure, ending with the following paragraph:

“Attempts to integrate rapidly growing Muslim communities in other countries haven't been much more successful. Europe has so far not found a solution for the integration of a group that has a hold on the future -- at least from a demographic perspective -- but that has no idea what this future should look like.”

Unfortunately, as we have written on this blog in connection with numerous other issues, few people in Europe have any idea of what the future should look like. The only thing that I find puzzling is why are the Americans not gloating, the way Europeans do when even smaller things go wrong over the pond?