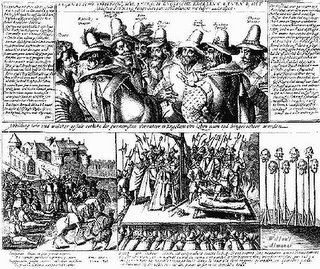 It seems appropriate to discuss sources of radicalism and the question of terrorism that is rooted in religion as well as political dissatisfaction on the anniversary of that earlier attempt to undermine the government of England. 400 years ago yesterday the plot to blow up Parliament was discovered with dire consequences for its perpetrators.

Plus ça change, plus ça reste la même. Once again we are facing an enemy that is outside the country as well as inside it. Europe, though not Britain particularly, has fought Islam before but it was usually in the shape of an external, and highly visible enemy. Now, we are less sure. Most of the Muslims we know are not our enemies. They want out of life much the same sort of things non-Muslims want: a job, a home, a family, good things for the children. But how do we know who are the ones who want something else: destruction and a weird idea of future conquest?

The parallels are not exact. I shall, I expect, be reminded by various readers that the Catholics of Elizabethan and Jacobean England had been here for as long as the Potestants had (though Guy Fawkes himself was not, I believe, of English origin), while the Muslims are relatively recent incomers.

But the real difference is not there but in the reaction. A new, muscular and aggressive Protestantism fought what it perceived to be the enemy. There was more to it than that, as there is in the fight with radical Islam. Catholicism was seen as a political enemy. Even later in the seventeenth century Milton in his Areopagitica explained why he did not consider it advisable to be tolerant of the Catholics – they were then the country’s political enemies.

Political enemies had to be dealt with in a political way as many a hapless Catholic found out under Elizabeth’s reign. Her answer to the Pope’s “fatwa”, if one may put it that way, was to create the most efficient secret service of the day. 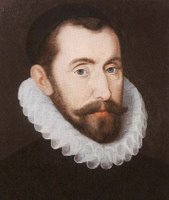 Walsingham’s lads dealt efficiently with Catholic plotters; knew exactly on which ships young scions of recusant families were departing to study on the Continent; and, if needs be, kidnapped escaping priests from the Catholic Lowlands.

Protestantism under Elizabeth blended into the concept of England, developed earlier than any other country’s self-definition as a cursory reading of Shakespeare’s history plays as well as other contemporary writings will show.

Modern Europe and modern Britain are, of course, very different. Gradually, we can see certain ideas being formulated about the fight we need to wage but it is taking a long time, the main problem being is that few people can seriously define what it is they are fighting for. (I believe I have pointed out in the past that only Hungarians manage to define Englishness or Britishness to any satisfactory degree.)

Francis Fukuyama, the eminent philosopher, goes further than that. In an article last Wednesday in the Wall Street Journal Europe [subscription only] he posited the theory that the roots of radical jihadist terrorism are not in the Middle East but in Western Europe.

This is not such an extraordinary idea. Let us remember that some of the worst ideologically motivated bloodthirsty dictators such as Pol Pot, Ho-Chi Minh and sundry African rulers, were not radicalized by seeing the poverty or alienation of their people but by studying in Western Europe, notably France.

(Of course, there were the Marxist African rulers who were educated and trained in the Soviet Union and its East European satellites but that was a deliberate plan.)

With the Muslims the problem lies in the non-existent social and cultural networks.

“We profoundly misunderstand contemporary Islamist ideology when we see it as an assertion of traditional Muslim values or culture. In a traditional Muslim country, your religious identity is not a matter of choice; you receive it, along with your social status, customs and habits, even your future marriage partner, from you social environment. In such a society there is no confusion as to who you are, since your identity is given to you and sanctioned by all of society’s institutions, from the family to the mosque to the state.”

This, I think, underestimates problems many Muslim countries have faced in the modern world where the traditional values do not seem to be as valuable or admirable as they might be expected to be.

Nevertheless, Fukuyama’s theory becomes of great interest when he compares the position of a Muslim in a traditional society to that of a Muslim in a West European country. Professor Bernard Lewis has written that while Islamic legal scholars in the past had discussed the way a religious Muslim should behave towards the “infidel” who had been conquered or who is the conqueror, there is no guidance for behaviour by Muslims who have, for various reasons, chosen or whose families had chosen to live under “infidel” rule. And that is confusing.

“The same [certainty of identity] is not true for a Muslim who lives as an immigrant in a suburb of Amsterdam or Paris. All of a sudden, your identity is up for grabs; you have seemingly infinite choices in deciding how far you want to try to integrate into the surrounding, non-Muslim society.

The identity problem is particularly severe for second- and third-generation children of immigrants. They grow up outside of the traditional culture of their parents, but unlike most newcomers to the U.S., few feel truly accepted by the surrounding society.”

The problem, as analyzed by the theoreticians of European integration (well not Monnet or Salter but some of the lesser ones and the second-rate ones we are saddled with at the moment) is virulent nationalism. An integrated European Union would miraculously excise all the nasty parts of European history from its identity, to be left, as we are often told, with the “European heritage” of freedom, democracy, human rights, motherhood and apple pie, as long as the pastry is not made with lard.

It is, however, this indecisive and far from robust cultural definition that is causing many of the problems, particularly as underneath all the talk, it is clear that national identity and self-definition remains stronger than European ones. But, as they are not supposed to be articulated so they cannot be offered to those on the margins of society.

Fukuyama sees it slightly but not all that much differently:

“Contermporary Europeans downplay national identity in favour of an open, tolerant, ‘post-national’ Europeanness. But the Dutch, Germans, French and others all retain a strong sense of their national identity, and to differing degrees it is one that is not accessible to people coming from Turkey, Morocco or Pakistan.”

In fact, it might be accessible in some of the countries. What remains inaccessible because it is incomprehensible and to a great extent non-existent, is the official post-nationalist European identity. Since we cannot (and many of us do not want to) define it ourselves, we cannot expect people who come to it from outside to join it.

At the same time, we no longer seem capable of defining that “strong sense of national identity” that undoubtedly still exists, albeit in a muddled way. Not all is lost. National identities are easier to define when they are under attack.

There is another problem for the immigrants and their descendants and this is a direct result of that famous European social structure that we are supposed to be so proud of:

“Integration is further inhibited by the fact that rigis European labour laws have made low-skill jobs hard ot find for recent immigrants or their children. A significant proportion of immigrants are on welfare, meaning that they do not have the dignity of contributing through their labour to the surrounding society. They and their children understand themselves as outsiders.”

As my colleague wrote some time ago about his childhood in a strictly Jewish neighbourhood of London, this is different from what happened in the past, when immigrants and their offspring made their way into society through various jobs, at first menial, then, perhaps, trading, then educated ones.

The European social model, that we must, according to all and sundry from Commission President Barroso downwards, preserve is little different from the old semi-feudal structure where everybody stays in the same place and advance is made as difficult as possible.

“It is in this context that someone like Osama bin Laden appears, offering young converts a universalistic, pure version of Islam that has been stripped of its local saints, customs and traditions. Radical Islamism tells them exactly who they are – respected memebrs of a global Muslm umma to which they can belong despite their lives in lands of unbelief.”

Fukuyama then goes on to explain that radical Islamism “is as much a product of modernization and globalization as it is a religious phenomenon; it would not be nearly as intense if Muslims could not travel, surf the web, or become otherwise disconnected with their culture.”

“Democracy and modernization in the Muslim world are desirable for their own sake, but we will continue to have a big problem with terrorism in Europe regardless of what happens there.”

At the end of the article Fukuyama outlines some of the measures being taken by several West European countries, some with more success than others, of ensuring that incomers become aware of the culture they are entering and become part of it.

Certain measures can be taken, though I think he is over-optimistic about the powers the British police has been given “to monitor, detain and expel inflammatory clerics”. I shall believe it when I see it. And, although there is a general recognition that multiculturalims is a failure, there is precious little evidence that it is being abandoned. For one thing, far too many people are doing well out of it.

What is, however, considerably more difficult and harder to define (as witnessed by the risible “test” of Britishness that is being proposed for new immigrants) will be the national identity we want newcomers to participate in, if they want to stay here. Unfortunately, wishy-washy European “ideals” of general kindliness are no substitute for a clear understanding, warts and all, of what a country is, what its people are and where they are going. Indeed, they are a big part of the problem.