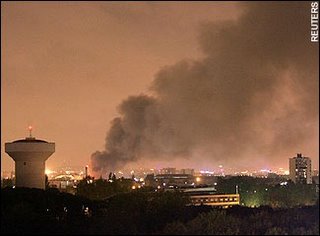 Clearly, the Telegraph has run out of photographs of scantily-clad supermodels and the Royals cannot be doing anything terribly interesting.

This means - at last – that it has elevated the French riots to the front page, complete with picture. And this at a time when the BBC is desperately trying to convey the impression that the situation is calming down

Anyhow, under the headline, "Leaders fiddle as France burns" – not exactly original, but never mind – the paper reports that the riots have "spun out of control", describing prime minister Villepin as "beleaguered". 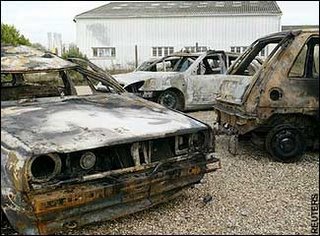 MarkSteyn also gives over his column to the riots, under the headline "Early skirmish in the Eurabian civil war". His thesis seems to be that the describing the riots as spontaneous "rage" are wide of the mark - "a very slapdash characterisation of what, after two weeks, is looking like a rather shrewd and disciplined campaign." "Some of us," writes Steyn, "believe this is an early skirmish in the Eurabian civil war."

Actually, I share my colleague's view that this ain't necessarily so. In any dysfunctional society – and what is France if not that? – the violence always erupts amongst the disadvantaged, so the fact immigrant population also being the most disadvantaged is difficult to disentangle. 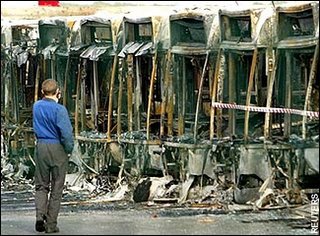 Certainly, the smouldering resentment is there, and you don’t have to stay in France for very long before you realise how "institutionally racist" the society really is. All you need to do is watch the queues at immigration at the airport and see how much longer it takes for the official to clear someone with a dark skin.

And as for Steyn's "shrewd and disciplined campaign", I think he neglects what they have been finding in Iraq, where the terrorists are no longer operating in defined cells with a set hierarchy.

The marvels of the mobile 'phone, texting, and the internet, means that different groups and individuals can share knowledge, "intelligence" and tactics, with amazing rapidity, learning from each others' experiences, without any single guiding mind. If technology favours democracy, it is also the handmaiden of anarchy. 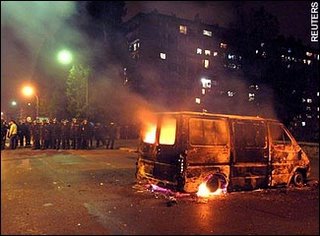 That said, the leader expresses the fear that the riots could spread through Europe.

It refers to comparisons with the May events of 1968, and even the revolutions of 1848, are tempting, but ventures that the current riots are distinguished more by their differences than their similarities. They have no clear political aim beyond an expression of disgust with the government and, in particular, the interior minister, Nicolas Sarkozy, and have not attracted other sections of society. 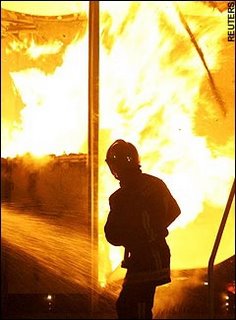 But, says the paper, the sense of impending crisis is deepened by the extraordinary weakness of those in office. France is marked by fin de régime rivalry between Mr Sarkozy and Dominique de Villepin, the prime minister. Germany faces the sclerosis of a grand coalition. In Italy, Silvio Berlusconi is more discredited than ever. In Britain, while Tony Blair defiantly bangs the security drum, the electorate waits for him to step down.

There, the paper has a point. When there is a vacuum of power at the centre, dark forces go to work and, if nothing else, the French riots have been fed by indecision and bickering in the government. And, elsewhere, there is a general feeling of malaise, of disillusionment with politicians, expressed by low voting figures. On this, concludes, the leader, the riots rocking France could feed.

I have a feeling that this is not very far off the mark.