Your freedom in their hands 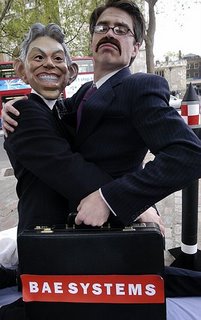 There was a time when Her Majesty's Government was responsible for the defence of this country, and with it the freedom of the Queen's subjects. But, in the brave new Blairite world, this, it seems, is no longer the case.

That much emerges from our reports on the closure by BAE Systems of the former Royal Ordnance factories in Bridgwater and Chorley, which provoked a flurry of Parliamentary Questions from Conservative defence spokesman Gerald Howarth, and others.

Asked by Howarth whether he expected the supply of components to be affected by the proposed closure of the BAE ordnance factory at Bridgwater, minister of state for defence, Adam Ingram, replied that BAE Systems Land Systems would "remain responsible for the maintenance of security of supply of components currently manufactured at the Bridgwater factory".

When also asked what assessment he had made of the implications for security of supply of the proposed closure of sites at Bridgewater and Chorley, Ingram replied in like manner that BAE Systems "are responsible for security of supply of ammunition." He went on to say that they have provided detailed plans to the Ministry of Defence, plans which, of course, are not in the public domain.

To an extent, the possible adverse effects of our ammunition and other essential military supplies being manufactured abroad can be militated by maintaining strategic stocks in this country. Thus, the question by Lindsay Hoyle, Labour MP for Chorley, was of special relevance.

There it is then. The provision and security of vital military supplies is nothing to do with her Majesty's government. It is entirely the responsibility of BAE Systems – and, of course, L'Escroc Chirac, in whose country much of the supplies will now be manufactured.