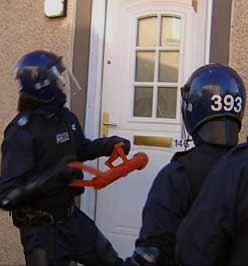 Philip Johnston excels himself in his "Home Front" column in The Daily Telegraph today.

Dealing with the vexed question of the European Evidence Warrant – which follows on from the European Arrest Warrant – he postulates the scenario based on David Irving, the British historian, who is in an Austrian jail facing trial on a charge of denying the Holocaust.

This is a crime in Austria and in several other European countries, but not in ours but, while Irvingwas arrested in Austria for two lectures he gave in 1989, imagine, writes Johnston, if Austria could order the Met to search Mr Irving's home and office in England for evidence, and seize papers and documents. "Could it possibly be right for the British authorities to enter a person's home at the request of a foreign court to obtain evidence for the prosecution of a crime that is not a crime in Britain?" he asks, then continuing:

Yet that is precisely what is proposed under the European Evidence Warrant (EEW), which is due to be agreed by EU justice and interior ministers this week. This is yet another plank in the gradual development of a common European judicial area. If anyone seriously believed that the rejection of the proposed constitution marked the high-water mark of European integrationist ambitions, then they have not been paying much attention to what has being going on in the criminal justice sphere.

Already, we have Eurojust, which advises on prosecutions; Europol, which has grown from a small, complementary intelligence agency into a large operational force; a putative European public prosecutor, an office that would probably have been established by now but for Britain's opposition; and the European arrest warrant, which can be exercised in any of the 25 member states for 32 crimes.

This edifice has been set up almost without public debate. Indeed, anyone who suggests that common judicial procedures look suspiciously like the trappings of a state is regarded as either a Europhobic zealot or someone who favours organised crime and terrorism. But the fact is that the perfectly reasonable concept of "mutual assistance" in criminal justice matters, first outlined in 1999, has been taken much further than suggested then.

What is both fascinating and appalling is that The EEW is the latest addition to this process and is due to be agreed before the end of the year. Yet, adds Johnston, you could be forgiven for not having heard about it:

The Commons committee that scrutinises EU laws has been tracking its progress through various stages of negotiation and is to hold a debate on Thursday. It is fiercely critical of the powers that the warrant bestows on prosecuting authorities and especially its impact on the doctrine of dual criminality, which states that no one can be extradited for a crime that is not also an offence in this country.

However, since the EU wants to treat itself as one country for judicial purposes, it would like to do away with dual criminality and has been gradually watering it down. The 32 crimes for which the European arrest warrant can already be exercised include offences such as xenophobia and racism, for which there are no British equivalents. The one concession to dual criminality is that, if the "offence", such as Holocaust denial, is largely committed on British soil, extradition cannot take place. But even this safeguard is likely to be abolished when the matter is reviewed in five years' time.

The EEW continues to chip away at the concept. In a report published ahead of this week's debate, the Commons scrutiny committee said: "If a foreign authority were to regard the publishing by a journalist of an article trivialising war crimes as the offence of 'racism and xenophobia', or the paying of officials for information about fraud or mismanagement of public bodies as 'corruption', then. under the EEW, a journalist who had written such an article or arranged for such payments here would be at risk of a search of his home and office in this country in support of foreign criminal proceedings."

The committee adds: "The doctrine of dual criminality is more than a mere technicality, as it gives the United Kingdom citizen - or any other person within the jurisdiction - a guarantee that he will not be pursued by police and prosecution authorities for his conduct which is lawful in this country. In our view, this proposal too lightly discards this guarantee."

The committee expressed "in the strongest terms our concerns that the measure could and would be used by foreign authorities to subject persons in this country to the exercise of police powers when, under the laws of various parts of the UK, they have done nothing wrong".

Imagine if the Government had proposed that the police should be able to search an individual's home and office, and impound his personal belongings, even though he had not committed a crime nor was suspected of one. Consider the parliamentary rows, the impassioned speeches about the rule of law, the inevitable defeat for the Government in the Lords.

Yet European laws that drive a coach and horses through some of our most cherished legal safeguards are enacted with hardly a whimper of protest, despite the best endeavours of the parliamentary scrutineers.

Johnston tells us that this week marks the last chance to stop the EEW becoming law and, because it requires unanimity, it could be blocked with just one dissenting vote. But despite the misgivings of the Government, Britain does not intend to use its veto. The warrant is now one of those shibboleths that must be bowed to in the name of anti-terrorist policy, even though it predates September 11 by at least two years and should be considered on its own merits. It was given fresh impetus after the July 7 bombs in London and EU governments decided to push it through by the end of the year.

Therein lies the paradox. At one, we have our government – and particularly Gordon Brown - railing against the depredations of the EU and the imposts from Brussels. Yet justice and home affairs issues – under which the EEW falls – come under the notorious "third pillar" established by the Maastricht Treaty, which means that the member states, not the commission, propose new laws, and any decision must be unanimously approved by the Council.

Therefore, as with defence and other issues, this is not a question of the big, bad commission imposing laws on us, relying on qualified majority voting to get its proposals through, but of what we are doing to ourselves – or more specifically what our own government, with the approval of Parliament, is doing to us.

Integration in this area is wholly voluntary and, without coercion, it is Mr Blair and his minions that are setting the pace. That says a great deal for the priorities of our masters.