Getting round the Karlsruhe Court 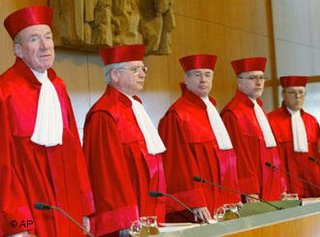 German Justice Minister Brigitte Zypries is trying very hard. Well, she is quite trying, especially as far as the German Constitutional Court and the länder are concerned.

Frustrated in her attempt to use the European Arrest Warrant to extradite a German national who had been accused of financing terrorist organizations and activities to Spain by the Karlsruhe Court’s decision on July 18, she has now produced a draft amendment to the European Arrest Warrant Act, which has been sent round the governments of the länder and relevant interest groups for comment.

Under the proposed new law

“criminal offender would not be able to avoid extradition on the basis of citizenship if the crime committed were related in some important way to another country. This would be the case, for instance, if a murder were committed abroad. German nationals would also be extradited in cases involving terrorist acts or international drug trafficking.”

There is another amendment, which should gladden the hearts of the human rights groups. Until now the Constitutional Court has always maintained that if the extradition of a German national is demanded, the case should be carefully analyzed to establish whether extradition is commensurate.

This rule would, under the new law, apply to foreign nationals as well, as long as they are long-term, legal residents, particularly if they have a German partner.