An open letter to President Bush 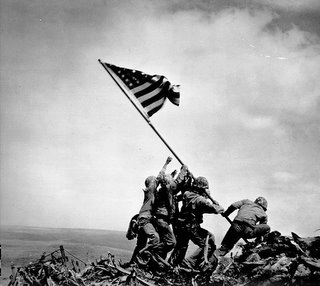 This blog has been extremely supportive of your war on terrorism and we have, even, suggested that the Nobel Peace Prize should go to the body of men and women who have done more for peace and democracy round the world than any other: the US Marine Corps. (We do acknowledge the achievement of the rest of the American services and, indeed, of the coalition troops.)

On balance, it seems to us that you will have to consider opening up another front but, on the good side, this may be the decisive one.

Another country is being engulfed in disorder that might easily spread across a continent (it has not so far, because that country’s problems are greater than many of the others’). This disorder has grown out of the dysfunctionality and extreme corruption of the political system. Your advisers would have told you that the president of this country managed to beat his extreme right-wing rival on a slogan: “Vote for the crook not the fascist.”

The country in question suffers from a severe democratic deficit with an ultra-centralized political system that is run by a small political elite. It has little by way of a free media and its tradition of democracy is very weak.

When, as we hope, the Marines deal with the present disorders, there will have to be a regime change accompanied by a constitutional convention. I very much fear the process of democratizing this particular country might be more difficult than similar processes were in Afghanistan and Iraq. However, it needs to be done.

Why does it need to be done, you might ask. After all, there are many dysfunctional, corrupt countries in the world, which periodically erupt into tribal violence. The United States, quite rightly, cannot police them all.

This particular country is a special case. It does have WMDs, though we do not know exactly the state they are in or who they are aimed at. You might have had better intelligence on that, although, to be quite candid, given the attachment some of your advisers feel for the country in question, you ought to read reports very carefully and balance them against others.

There are other reasons why this particular country needs your attention and why, quite possibly, no other will afterwards. In the first place, it is a country that is implacably hostile to the United States and to the Anglosphere. That, in itself, is not a reason for having to intervene. But it has created a union (which is not as strong as it used to be, since its social model is going up in flames even as we speak), whose prime purpose is to oppose the United States.

The country in question and its corrupt political leadership have an extensive track record of supporting tyrannical regimes and terrorists as well as terror masters. Remember who gave all possible help and support to Chairman Yasser Arafat, to the detriment of the peace process in the Middle East? Remember who had close and mutually beneficial relations with Saddam Hussein? I could go on.

It is not only political and financial support that anti-American dictators and various terror masters can hope for. The country in question has provided ideological training to an even greater extent than the Soviet Union had done in the past. Several of the world’s worst, most bloodthirsty dictators and mass murderers were radicalized not in their own countries but in the one I am describing.

From every point of view, Mr President, it is highly expedient that the United States looks carefully at the possibilities of dealing with this particular problem. Do not look to the United Nations. Any resolution you might contemplate would be blocked by China, the country’s greatest friend.

It is up to you to make a decision. However, let me assure you that should the United States decide to launch Operation French Freedom, Britain will be there with you, just as it was in 1944.