A matter of little importance? 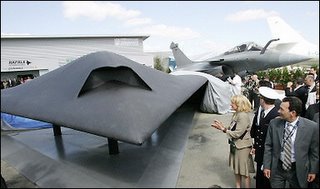 The Financial Times has picked up on the defence ministers' meeting which will be held today formally to agree a “voluntary” code of practice on defence procurement. This news we tucked in to a post on Saturday, reminding our readers that the heads of agreement were in fact settled in October at RAF Lyneham.

Although we have followed the twists and turns of this issue very closely, from the EU commission's white paper on defence procurement in September 2004 to the present day, it is one which has been almost totally ignored by the mainstream media. My guess is that, beyond the Financial Times and le Figaro, that indifference will continue – athough a full account can be found on the Euractiv site.

Reading the runes of the FT piece, however, we note with interest that our own defence secretary, John Reid, is hailing the agreement as “a practical first step towards more competition”, and also praising EU countries’ efforts “to move towards common purchasing for projects such as air-to-air refuelling and drone aircraft.” Having bought the Airbus flight refuelling option, Reid is in this respect indulging in an element of self-congratulation, but the reference to "drones" (i.e., unmanned aerial vehicles) is perhaps just as significant.

As we remarked earlier, until June this year when the project was cancelled, the UK was in partnership with the United States on the development of advanced UAVs in a programme known as FOAS – the Future Offensive Air System. This was to replace the strike capability of the RAF's fleet of Tornado GR4s which is expected to reach the end of its operational life around 2018.

So far, no other programme has been substituted by the French are running a multi-national project called Neuron, aimed at developing the advanced UAVs to which the FOAS programme was devoted. A mock-up of the first model was unveiled at the Paris air show on 2 June (see picture), just as Reid was cancelling FOAS. The suspicion is that the UK will now throw its lot in with the French, further integrating our defence capabilities – a suspicion reinforced by Reid's comments.

In an equally sinister development, the French are co-operating closely with the Russians on UAV development and, of course, the Russians are major arms suppliers to the Chinese. The closer integration of defence procurement that will come today with the signing of the agreement will, therefore, suck us into the nexus of arms suppliers to the Peoples' Republic of China and, inevitably, distance us further from the United States.

Nevertheless, none of this is important enough for the mainstream media to report.