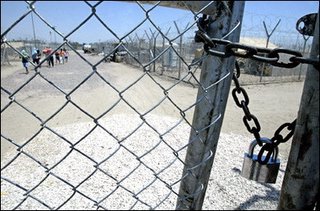 What to make of the bizarre situation where member states found to have allowed the operation of "secret CIA detention camps" are being threatened with loss of their EU voting rights?

This is according to the Guardian today, and many others, where the EU justice and home affairs commissioner, Franco Frattini, said there would be "serious consequences" if reports of CIA jails in Europe turned out to be true.

The finger is being pointed at Poland and Bulgaria, the latter not even a member, with Frattini stating yesterday that he "would be obliged to propose to the Council serious consequences, including the suspension of voting rights in the council."

This, of course, is redolent of the fracas in 2000, when the "extreme-right" Austrian Freedom Party received 52 seats in the lower house of Parliament, giving it a share in government. Led by Joerg Haider, who had earned notoriety after making remarks interpreted as praising of Hitler's Germany, was quickly blackballed by the other 14 (then) member states. Amongst other things, Austria was permitted to join in only the most formal of discussions concerning EU business, and was excluded from any unofficial negotiations.

Of course, the brave Frattini's is somewhat into camps himself, proposing as Italian foreign minister the creation of transit camps in the Mediterranean – Libya was suggested - for illegal immigrants as a way of countering the wave of human traffic heading for Europe. Dubbed at the time the EU’s concentration camps, in August 2004, Berlusconi went so far as to discuss the details with that well-known humanitarian, Colonel Ghaddafi.

A year previously, Frattini's ministerial colleague, Umberto Bossi, had come up with a slightly more radical scheme, suggesting that boats carrying illegal immigrants should be shot out of the water. In Corriere della Sera, he was quoted as saying, "After the second or third warning, boom... the cannon roars… Without any beating about the bush. The cannon that blows everyone out of the water. Otherwise this business will never end."

Needless to say, there was then no suggestion then, or a year later that Italy should be drummed out of the EU. Shooting nig-nogs or locking them up in concentration camps is quite acceptable. But helping the Americans keep Islamic terrorists off the streets – now that is a really serious matter.