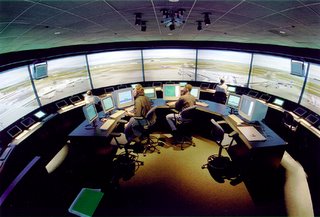 Jacques "Wheel" Barrot, the EU’s transport commissioner has announced a €20 billion makeover for Europe’s air traffic control system, allowing a doubling of the number of flights in the next 15 years.

Styled as a "European air traffic management Master Plan", it is code-named SESAR. The Commission claims it to be a "new-generation air traffic management system" which "will be vital for managing the growth in air traffic". It is to be developed together with Eurocontrol - which will meet half the initial €30 million costs - and, in a second phase, with (unspecified) industrial partners.

And at the heart of this system, which is part of the EU's "Single European Sky" initiative is, guess what – the Galileo satellite global positioning system. And there is the money-spinner. Despite the fact that commercial (and military) aircraft currently use the US "Navstar" GPS system, the EU will make it mandatory for all aircraft entering European airspace to be equipped to receive the Galileo system – for a fee, of course, thus bailing out a totally unnecessary system.

All we have to do now it wait to see which French firm (or consortium) gets the development contract – or is that being too cynical?