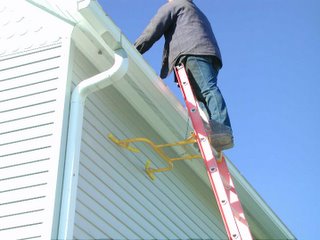 We have remarked on it before and even last night there was a particularly egregious example of EU requirements being discussed, without the EU even being mentioned. And here we go again.

In that well-known publication, The Bradford Telegraph and Argus – which boasts that it outsells the combined total of national dailies within its area - features a long article by David Snowball, assistant regional director of the Health & Safety Executive, to commemorate "ladder week".

Headed: "steps to ensure the safety of ladder users", Snowball deals in detail with the hazards of ladder usage, with reference to the government's Work at Height Regulations, to which effect his organisation's "ladder week" has been devoted.

But nowhere in his article is there any mention that the Regulations to which he refers are based on and required by the EU’s working at heights directive (Directive 2001/45/EC, 27 June 2001). Bizarrely, there is not a single mention of the EU in the whole piece. You would think there was something to hide.