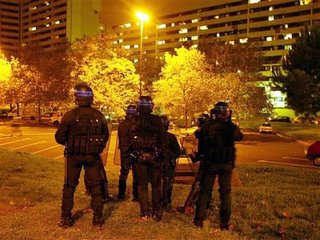 Throughout the prolonged spasm of rioting in France, now in its 17th day, one dog which has been strangely silent is the European Union. Quick to give its opinion – wanted or not – on any manner of issues, it has refrained to commenting, much less offering anything like criticism.

Now, that silence is broken. El presidente Barroso has leapt into the foreground, not of course criticising France but actually offering money - €50 million, "to help it tackle problems in its suburbs that have provoked unrest”.

According to Reuters, Barroso revealed his offer on Europe 1 radio, stating that the main challenge facing France in dealing with impoverished suburbs was to create youth employment, "The best social politics is to create employment," he said. "When you have 60 percent of youths unemployed in suburbs it is a problem."

Interestingly, Barroso said he had offered to make the funds available in a letter to Villepin on Friday. "If the French authorities want to do this with us, it is possible to do it with a rescheduling of credits," he is reported as saying, which seems to suggest that this is not new money. Could it be that Barroso is grandstanding? Perish the thought.