A suspension of interest 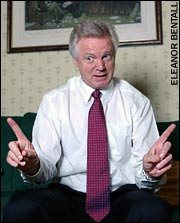 The really interesting thing about the continuing "drama" of the Tory leadership contest is how uninteresting it has become – trivial even.

Today we get, according to The Guardian and others, a report that David Davis – whom I believe is one of the contenders – is pledging not one but two EU referendums if he becomes prime minister.

Since Davis is unlikely to become even leader of the opposition, this is largely an academic issue, but it is interesting to see a man offering a policy which, on current estimates would cost the best part of £10 million per go. Hasn't he heard of general elections and manifesto commitments?

Anyhow, for the first referendum – and £10 million - Davis would ask the electorate which powers should be returned from Brussels to Westminster. For the second – at another £10 million – he would ask the if he had delivered on the first.

Despite this, though, Davis insists that withdrawal is not on the agenda. The man simply wants a mandate which would "give us the authority to look the European commission in the eye and say this is the view of the British people".

Needless to say, the BBC immediately pulled Ken Clarke on to the Today programme, to denounce Davis and Mr “Policy Vacuum” Cameron, declaring the Eurosceptic stances of the two Davids as a "whip up our core vote" strategy.

In full flight, Clarke told the BBC listener that: "If the two Davids start competing on the Eurosceptic front, which there is a slight sign that they are, I hope it doesn't mean that the Tories are going to go back to the old, old 'Let's whip up our core vote with rightwing issues' approach to elections.

"Frankly," he said, "that is the way in which we will be choosing a leader of the opposition and no more."

In all probability Clarke is right on this one, althpough not for the reasons stated. Even with (or especially with) Cameron, few but the very optimistic believe that the Tories will win the next election. Even though the Labour government is beginning to look increasingly like the Major government in its dying days – especially with the forced resignation of Blunkett – there is no guarantee that disillusioned Labour voters will switch to the Tories.

We are, effectively, in new territory, where the main opposition part can no longer rely on the disaffected to sweep it into power, so the real political question is what are the Tories going to do when they lose the next election. Then, it will start getting interesting.