They just don't give up 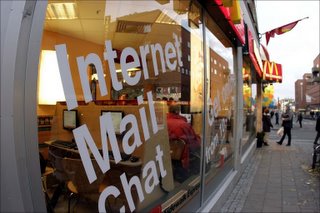 Even though the idea of the tranzies taking over the internet is plainly preposterous, as my colleague pointed out last month, the EU commission is still persevering in its attempts to detach the US from the system.

This is the spat about who should control the so-called "top-level domains", currently administered by the California-based non-profit company, Internet Corporation for Assigned Names and Numbers (ICANN), under the oversight of the US Department of Commerce.

But EU officials are now complaining that Washington has changed the rules of the game and plans to keep permanent control of the system. According to Reuters, the EU is claiming that there was an agreement that Department of Commerce control would be phased out but this summer, but the US has now announced they would maintain this oversight function.

The Commission wants to take Commerce out of the loop but, amazingly, does not have any concrete alternative proposals. It officials simply resort to arguing that the system should be under the control of an international body, in which "the role of governments ... should be mainly focussed on principal issues of public policy, excluding any involvement in the day-to-day operations."

Americans are less than impressed, contrasting their "light touch" with the prospect of interference from upwards of 200 countries. "We don't really see how an organisation can have oversight and final veto control and not have an impact on day-to-day activities," says David McGuire of the non-government Centre for Democracy and Technology in Washington, D.C. "We don't think it's optimal for any government to be directly involved in the oversight management," of ICANN.

McGuire says the US government has never reversed an ICANN decision and eventually the organisation should stand on its own two feet.

The whole issue comes to a head at the World Summit on the Information Society (WSIS) in Tunis on Wednesday and Thursday, when the EU will press its case, alongside most of the rest of the world. With the US still not budging, it should be an interesting meeting.