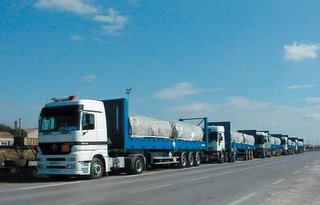 You cannot fault Jacques "Wheel" Barrot for lack of ambition. Despite the criminal record that dare not speak his name, as EU transport commissioner he is planning to set up what might be the granddaddy of all EU agencies. Never mind the European Railways Agency, says our Jacques, he wants an all-embracing TransEuropean Transport Agency.

This is according to Lloyds List, which reports that the new agency is being mooted in “an internal document”, with Jacques arguing that a separate agency is needed to oversee the EU's “burgeoning transeuropean transport network”.

The "Transeuropean Transport Network Executive Agency" would have similar staffing levels to the newly created European Maritime Safety Agency: about 100 when fully operational. But it would oversee a budget of potentially more than €3bn ($3.5bn) a year and would consist of experts committed to "higher quality and effectiveness of project management".

The undated memo suggests the commission take a formal decision to create the agency early in the New Year, allowing the body to come into being some time in the following months. Its rationale is that the commission, in its present organisational form, "might find it difficult to handle the financial and technical management of a budget that has more than tripled," the memo adds.

That is, of course, if the budget settlement is agreed, which looks uncertain at this time. But the fact that the commission is planning yet another of its agencies to take out a huge chunk of work currently handled by member states is yet another example of the paradox of the EU. One the one hand, the construct is dying politically, and even its own acolytes are losing faith. On the other, the pace of integration continues unabated.

But then, so they say, the Roman Empire was already in decline when it commissioned some of its finest, most grandiose buildings. Perhaps this is what we are seeing now, the new agencies being the Roman equivalent.