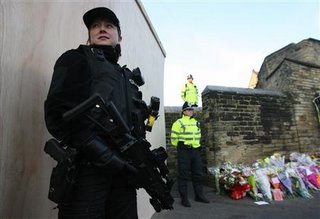 "Leaving the EU would not make any difference," my colleague Helen Szamuely remarked yesterday evening. She was chairing the final session of the Bruges Group meeting in Kings College London, where Ruth Lea and I had given our views on alternatives the European Union.

The point Helen was making – which Ruth Lea had also made – is that as long as this government (and previous ones, for that matter), share the same dirigiste, centrist mindset as the legislators in our Brussels government, then we would continue to suffer from the same type of managerial, anti-democratic form of government that emanates from the European Union. Nothing very much will change.

No more so is that evident that in the story offered by Christopher Booker in his column this week, where he reports on the government plans to restructure the 43 local police forces of England and Wales on regional lines.

Although the title of the piece is: "The urge for 'Euro-regions' plays fast and loose with law and order", there is no evidence that this restructuring – the most fundamental in 170 years of British policing – is being carried out to any sort of European agenda. While, as Booker's story reveals, home secretary Charles Clarke is pushing regional structures with extraordinary speed, there is no "smoking gun" which can prove that Brussels is behind the plan.

Nevertheless, there is clearly a European agenda to the regionalisation process, which is being pursued regardless of the decisive "no" vote in the North East regional assembly referendum. This will result in our police forces being cut from the existing 43 to 12, corresponding with the 10 regions of England, London and Wales (the two largest regions, South East and North West, can each have two forces). Wales is to have just one force, not four as now. The seven South West forces are also to be merged into just one, from the Cotswolds to Cornwall.

With the murder of Sharon Beshenivsky, the 38-year-old Bradford, PC still very recent, there is much in this weekend's newspapers on the story but it is only Booker who deals with the regionalisation story. Yet, while the general media takes the predictable and largely unproductive line of pursuing the question of whether all police officers should be armed – the Beshenivsky death and the move towards larger police forces are not entirely unconnected.

Rehearsing the key facts of the Beshenivsky murder, we are told that she and her colleague, Teresa Milburn, 37, were responding to a silent panic alarm, relayed from a private security company, and walked into a hail of bullets as they arrived at the scene, an Asian travel agent in Morely Street, Bradford, by the name of The Universal Travel Express.

West Yorkshire chief constable Colin Cramphorn says they had no reason to believe that this was anything but a routine call-out, but the locals might disagree. According to The Sunday Times report:

Though the modest shop looks unremarkable, it was, as locals knew, a conduit for significant amounts of cash. Many of the largely Asian local community took money to the agency so that it could be transferred to friends or relatives in Pakistan. It was known as one of the quickest ways to send help to those in need after the earthquake in Kashmir. "There was a lot of cash there; people come in with it so it can be wired back home," said Sher Khan, a local councillor and friend of the family that runs the agency. "Many extra people have been doing that since the earthquake."

Then, those with longer memories will recall that, in January 2003, there was another armed robbery of an Asian travel agent in Bradford, when a "substantial quantity of cash" from a travel agency, this one in Lumb Lane, not ten minutes drive from the Morely Street premises. That time, there was also a fatal shooting, Mr Taz-war Hussein, 36, who was praised for his bravery after he and a friend had chased the robbers' car before a confrontation in which he was shot once in the chest with a handgun.

In a comment that could apply equally well today, Mehrban Hussain, a Conservative councillor for the university ward, which covered the area where the incident took place said that gun crime was a major problem in the Bradford area. “We have had a few shootings in different areas of the city over the past year," he said. "A lot of criminals are now carrying guns. The police have got to be stronger in clamping down on these people.”

Gerry Sutcliffe, MP for Bradford South, said he would be raising concerns about shooting incidents in the city with West Yorkshire's chief constable, Colin Cramphorn. "I have my concerns because there have been a number of incidents in Bradford of late," said Mr Sutcliffe. "Guns are too freely available. It is an issue the government is tackling. Anyone who carries a gun is a risk."

Coming back to the present, much is made of the fact that the current shooting took place in a location minutes away (in fact, just across the road) from the main Bradford police station. But that is to give a false impression of the nature of the police station and its proximity. The building is the Bradford police headquarters, a vast, sixties, multi-story office, full not of operation police but bureaucrats in uniform. Furthermore, the side adjacent Morely Street is the cells entrance. The main entrance is the other side of the complex, perhaps ten minutes brisk walk from the scene.

As it transpires, it was not police from this building who attended the scene. Beshenivsky and Miburn were, in fact, based at Eccleshill, in the northern suburbs of the city, and would not have had the local knowledge of the patch. Indeed, they responded by car, rather than as a foot patrol working in the locality.

What we have, therefore, is an out-of-area team of probationary women police officers responding to a panic alarm from a high-risk premises of a type with a known vulnerability to armed attack – the sort of premises which, one would of thought, would merit automatic attendance from an armed response team, as would be the case if a bank or building society was being attacked.

On the face of it, therefore, this looks like yet another cock-up by West Yorkshire's finest, one that ended up with two of its officers being shot and one killed. But the broader issue is that it seems also to be a failure of local, and particularly intelligence-led community policing.

By coincidence, in the Sunday Times today, is an article on the success of community policing – in Chicago, where the stress is on local knowledge, responsibility and accountability.

In Bradford, however, we do not have local policing. We do not have a local police force. We are policed by West Yorkshire Police, with its headquarters in Wakefield – distant, unaccountable, remote, inefficient and, ultimately deadly. And, as Booker reports, the government’s answer is to make such police forces more distant, more unaccountable, more remote – with results that are all too predictable.

This may not be in response to a European agenda, but it is certainly from the same wellspring, which favours distant, unaccountable, remote and invariably inefficient forms of government. As Helen told us therefore, leaving the EU is not by any means the whole answer to our problems. We have to tackle bad government, whether from Brussels, Westminster or even the "local" Euro-region.

Needless to say, but for Booker, that issue is not even on the agenda. Instead, we have the media re-opening this tired, lame issue of whether all police should be routinely armed. Leaving aside the question as to whether two "rookie" policewomen with handguns might be more danger to themselves and the public than any criminals, the real problem seems to me that our greatest danger is the bureaucratic mindset which is at the root of too many of our problems.