They are the masters now 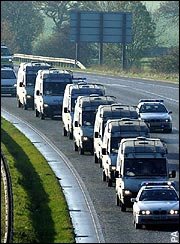 Such is the thrall of the "Dianafication" phenomenon in the treatment of tragic events, that criticism of the police in juxtaposition to news of the Bradford shootings has brought rebukes on this Blog's forum.

But I do wonder whether I am the only person in the world to have read the description of the transfer of the shooting suspects from London back to Yorkshire with growing dismay. Recorded by the Daily Mirror, the account went as follows:

A ring of steel surrounded five of the six suspects as they were driven 200 miles from London to West Yorkshire yesterday. The maximum security convoy was guarded by armed officers and shadowed by a police helicopter. It included seven white Transit vans and eight police cars with flashing lights. Other unmarked vehicles travelled alongside in a rolling roadblock up the M1. Slip roads were temporarily sealed off to allow the convoy a smooth passage north.

These suspects are not terrorists, part of a larger armed group at war with society – like the IRA – whose members might be prepared to attack a police van carrying prisoners, on which basis, 15 police vehicles and a helicopter, plus all the others used to seal off the motorway slip roads, seems a grossly excessive use of resources – and power.

Pity the unfortunate motorists, truck drivers and others who were caught up in this charade. But I do not have to imagine the disruption as this is not that unusual. Every week or so, there is a transfer of bullion from London to Leeds, which is carried out by a convoy of armoured vehicles escorted by police cars, which forms a rolling roadblock up the M1, causing considerable delays to traffic.

This once cost me 40 minutes on a journey and, when I enquired as to the reasons for the delay, I was told that the consignment used to go by train, but it was cheaper by road. Cheaper, it is, for the authorities, what is the cost to the thousands of people delayed by what amounts to administrative convenience?

Similarly, how many people were inconvenienced in central Bradford last Friday, when the police not only closed off the immediate crime scene but extended the road closures to the main roundabout on the central ring road on the very evening that the Christmas lights were switched on and people were flocking to town to see them. Whether accident or incident, the police these days seem to delight at closing off as many roads as they can get away with, causing maximum disruption.

And what was the point of the girlie with the gun (right) guarding the flowers laid at the scene of the shooting? The photograph was taken after the announcement that six suspects had been detained in London, so what did the police think they were achieving?

Then, with talk now from ex-chief constables of reintroducing the death penalty for killing policemen, what price the life of a public-spirited citizen who gives chase, as with Mr Taz-war Hussein who was gunned down in a very similar incident? What makes the police so special?

And why are not more questions being asked about why two probationers were despatched to a high risk premises – viz the BBC website, which records:

Significant amounts of cash are handed in at travel agencies by people arranging money transfers for relatives in Pakistan. Shahid Bhatti, owner of Bradford Travel on Lumb Lane in Bradford city centre, said: "Over the past 10 years a pattern has been established of robberies on travel agencies in Bradford. "We have been targeted because people know about the money transfers. "My brother was robbed outside our office in 1997 and since then we have increased our security. We have installed CCTV cameras and we report any unusual behaviour on Lumb Lane. "This incident is a horrible tragedy, but we've been expecting something like this."

More and more, this looks like – as we asserted earlier – a major cock-up by the police, but, in the welter of maudlin sentimentality over the murder of a female police officer – few dare offer a note of criticism.

And what has this got to do with a site called EU Referendum, dedicated primarily to EU affairs? Well, the answer is simple. What we are seeing here is the visible side of unrestrained power exercised by officials – excesses which always happen when democratic control and accountability break down.

That is the way the EU commission behaves, only it is less visible. The current behaviour of the police illustrates why officials must always be under the control of democratically elected politicians. And that is why the EU cannot be allowed to survive, lacking as it does that essential element.